Boy With Service Dog Is Denied Photos With Santa 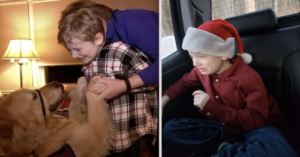 Like most kids, 9-year-old Hunter loves Christmas. He loves the holiday season almost as much as he loves his loyal service dog, Angel. So, Hunter and Angel were ecstatic at the idea of taking pictures with Santa at a Massachusetts mall. However, one exciting photo turned into a nightmare when the staff would not allow him and Angel to take a picture with Santa. Hunter was left heartbroken during the happiest season of the year.

Angel is a sweet and adorable dog, but she is so much more than just a cute companion. Hunter has epilepsy, and Angel is specially trained to help him. She is always by his side to protect him. She can warn people of his seizures and even quickly bring Hunter to a comfortable spot if he’s about to fall.

Hunter needs Angel on a daily basis. So, when his family was informed that Angel was not allowed at the photos with Santa, they were furious. They had waited nearly two hours only to have their happy moment ruined.

Christmas is one of Hunter’s favorite things. His mom, Sarah Specht, explained that he even tries to wear his Santa hat year round. Meeting Santa is one of the highlights of the year for him. But this year, he was left wondering why Santa didn’t welcome his beloved service dog.

When the family got in the car after this heartbreaking event, Hunter was devastated. Specht was worried that he would begin to doubt Santa after this experience.

“Christmas is supposed to be a magical time and for that to happen last night and see my son crushed,” said Specht. “I hope that no parent ever has to face that.”

They reached out to the company in charge of the photos to inform them of this issue. The company explained that they do allow service dogs at their events. They agreed that this situation was not acceptable by any means.

“The employee involved in this incident did not follow our Cherry Hill Programs protocol,” the company officials explained. “The individual has been suspended and we are investigating the matter. We have reached out to the family with an apology and invitation to return for a private visit with Santa at their earliest convenience.”

A Happy Ending for Hunter

While this offer for a private visit with Santa was a heartwarming response alone, Hunter ended up experiencing something even better. News about Hunter’s situation quickly spread around the community. Police officers and firefighters decided to escort Santa to Hunter’s house to get a photo with both Hunter and Angel.

“The fact that they heard the story and they want to fix this for Hunter, it means so much to me,” said Specht. “He’s at that age when he may start questioning Santa and I don’t want to see him lose that belief out of a bad experience.”

The kind actions of the community made Hunter, Specht, and of course, Angel feel very grateful. Christmas is such a magical time of year, so no child or dog should be forgotten. Angel is a huge part of Hunter’s life, so kids like him can’t live without their loyal dogs by their side.

The post Boy With Service Dog Is Denied Photos With Santa appeared first on iHeartDogs.com.