Malnourished “Christmas Miracle” Dog Given Foster Home For The Holidays 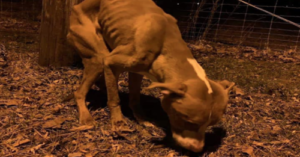 The winter months are always extremely busy times for animal rescues and shelters everywhere. Tragically, there are often more pups left out in the cold than there are places for them in the shelters. The kind hearts of generous foster families are what give starving and cold strays the second chances they desperately need.

That’s how one poor malnourished stray pup, now named Joseph, got off the streets in time for the holidays. Noah’s Ark Rescue Project And Shelter (NARPS) in Philadelphia was already inundated with animals in need, but the giving nature of the season had more in store for little Joseph.

One night in late December, Joseph wandered out of the woods at a local park. He was bone-thin, starving, dehydrated, and carrying parasites when rescuers got their hands on him. NARPS shared a heart-wrenching photo of the pup the day he was found on Facebook.

“We shall call this handsome boy… Joseph, which means ‘God will add another.’ We weren’t expecting to take on anymore pups smack dab in the middle of the holiday hustle and bustle, but here is our Christmas miracle of 2019!”

Noah’s Ark Rescue Project and Sanctuary operates mainly as a foster-based program for now, without a facility. A generous foster with NARPS stepped up to take in Joseph and the rescue issued a plea for donations for his care. They noted how badly this dog wanted to get better.

“Joseph mustered up strength and tenacity with his ferocious desire to survive, and muscled his way out of those woods to find help. He fought this hard for himself just to live, now it’s our turn to fight for him!”

The Christmas spirit really ramped up in the community. More than enough donations to cover Joseph’s care came in, so those extra funds will instead go to help other pups in need. For example, a 15-year-old dog named Diamond surrendered on Christmas Eve will benefit.

Joseph’s foster parent set him up with his very own Instagram account. Now we can all keep track of his progress!

He’s still very skinny, but he’s looking happy and well cared for. When they refer to Christmas miracles, this is the kind of thing they’re talking about.

Anyone interested in adopting Joseph should reach out to the rescue for more information on his availability. And if you aren’t ready to adopt, consider becoming a foster parent to make the season of giving last all year long for another dog in need!

The post Malnourished “Christmas Miracle” Dog Given Foster Home For The Holidays appeared first on iHeartDogs.com.

from iHeartDogs.com http://bit.ly/2QHMBgC
via IFTTT