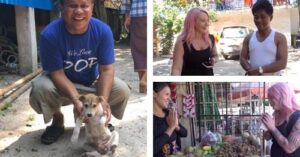 It can be challenging to see things from another person’s perspective, especially when that person is on the opposite side of the world. Each of our days is so different, and that in turn affects the animals in our lives.

Something I’ve learned in my travels is how large of a spectrum there is when it comes to loving our furry friends. Though each end of the scale may look completely different, it doesn’t mean either end is wrong. Though the way I spoil my fur baby at home is nothing like the way a local Cambodian family spoils their canine companion, our love for our dog is just the same!

If there’s any one thing I can help to shed light on, it’s the fact that loving a pet can come in many forms based on where you are in the world. I set out on a task around town to speak with local Cambodian families and really understand the ways in which they welcome furry friends into their homes. I wanted to get a peek inside the lives of their animals, how much they value their furry friends, and if they possess the same love for their pets as we do in the states.

The first family I spoke with was a family of 4 that owns a local sporting goods store in a tiny neighborhood in Phnom Penh. With having a business of their own and a separate home away from their store, they’re considered extremely privileged.

The father of this family has two children in which he desperately wanted to grow up alongside a canine friend. Seeing YouTube videos of American and European children running hand in hand with a dog, he knew his children would thrive in a home with a dog. Fast forward to now, and his kids have two lovable pups that they’re growing up alongside with.

“I’ve seen on YouTube that people in Europe or USA, they always give a child a pet, and I want that for Cambodia.”

Next, I spoke with a hard-working woman who owns a fruit stand on a busy street in Boeng Tumpun.  She works from sunup until sundown selling mangoes and papayas and makes it home at night just in time to tuck in her children for bed.

She doesn’t have any pets that live in her home, but she does care for two cats that frequent her home in hopes of food. She makes sure to put out chicken and rice each morning and night, and asks her children to check on them during the day while she’s away.

She even took the female kitten to the PPAWS animal clinic to have her spayed when she reached 2 pounds. While these two cats are still free-roaming, she certainly cares deeply for their well-being.

Last is the woman who has always loved animals, and often thinks of how wonderful it would be if more of her neighbors were open to the idea of adopting a pet. She rescued a scruffy pup that found himself alone and wandering the streets a few years prior and now can’t imagine her life without him.

“Animals are so honest and so naive. If we can, we should try to provide a place to stay for stray cats or dogs.”

On the surface, we may be quick to assume that these animals lack the care we may offer in the States, but it’s clear when speaking to these families that the love is just the same. In reality, the struggles that these families face living in extreme poverty almost make it more challenging to have a pet, and they certainly are taking the extra steps to ensure their happiness. Though these animals may be covered in a thin layer of dirt, roam their streets freely, or lack a plush bed to rest their heads at night, they are still immensely loved.

I’ve learned that the act of loving an animal despite the daily struggles you may face is an incredible force in itself. Loving a dog or cat is not simply black and white, and that bond can come in many forms. I know going forward that I will always have more of an open mind when it comes to animal care, and I hope this article can help you do that as well!

Check out Part 1 in my series – Amber Abroad: Welcome To iHeartDogs Around The World