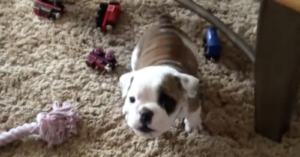 Sometimes controlling that baby-talk voice you use to interact with your dog can be tough. We can’t help it, they’re just so tiny and cute! The “voice” is basically a reflex. Whoever filmed an adorable viral video of a Bulldog puppy has this issue too.

In the video that boasts hundreds of thousands of views, an extremely tiny puppy named Greta gives some sass to her person. Her human sits on the couch, babbling at her in the “voice.” From the floor below, she replies to him in little barks as she runs around frantically.

This little gal is a feisty one. Her person tries his best to interpret her squeaks. Maybe she does not like her new name, he wonders aloud to her. She yips and growls back in her high-pitched puppy voice.

Greta continues to bark with an attitude. Either she won’t be spoken to in this way or she wants something and just doesn’t know English. Who knows.

Her dad’s next guess: she just wants to be up on the couch with him. He reaches down to pick her up. She looks so tiny inside his human hand!

Well, that did it. It turns out that’s what Greta really wanted all along. Finally, she seems satisfied with her spot on the couch. No more tiny barks from this content girl.

Don’t just take my word though. Watch this absolute gem of a video for yourself below:

Should You Adopt A Bulldog Puppy?

Obviously, Bulldog puppies are adorable. But should you adopt one for yourself? There are a few things about Bulldogs you should know before you consider adopting one.

Even though they’re short, these dogs are stronger than they look. Adult Bulldogs typically weigh between 40 and 50 pounds. These dogs must remain at a healthy weight, as they are subject to joint issues. You’ll need to make sure they get proper exercise. Some Bulldogs require more regulated diets to prevent digestive issues.

English Bulldogs like Greta love attention, and you should be prepared to give it to them! They’re also pretty good with kids and can handle rough play.

If all that sounds good to you, look into The Bulldog Rescue Network! That way, you can adopt a breed you love while helping abandoned or homeless dogs.

The post Bulldog Puppy Being Baby-Talked To Demands Respect appeared first on iHeartDogs.com.