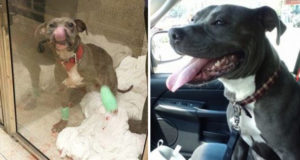 Cleveland police officers arrived at a terrible scene in the summer of 2014. Concerned witnesses reported a man abusing a Pit Bull in the middle of the street. The abuser reportedly hit the dog with a leather belt, struck him on the face and paws with a brick, and choked him.

Fortunately, one witness was able to convince that man to hand over the dog. They readily offered him to the responding officers for help. According to officers, the poor pup jumped immediately into the front seat of their patrol car and lied down on the floor. He was more than eager to be saved. The officers were happy to save him too.

There’s no way to justify any animal cruelty, but the fact that someone would hurt this sweet dog is truly unimaginable. The man witnesses reported as the dog’s abuser couldn’t be found at home. That wasn’t enough to stop them from bringing him to justice.

Thanks to the help from witnesses of the abuse, officers obtained a warrant to arrest the alleged abuser. He eventually faced criminal court, though he did try pleading “Not Guilty” to charges.

No One Will Ever Hurt This Pup Again

Police brought the dog to VCA Great Lakes Vet Specialists for treatment. Badges for Bullies covered the costs of treatment and follow-up care. Badges for Bullies is an organization that works to build and strengthen the relationship between police, the animal rescue community, and local citizens.

Patrol Officer Brandon Melbar decided to foster the dog as he recovered. It soon turned into a foster fail and Officer Melbar officially adopted the dog and named him Harvard. From photos, Harvard seems to be doing great in his new home! Most importantly: no one will ever hurt him again.

Most of the news that circulates about law enforcement tends to be negative, and stories like these are nice reminders there are caring officers on the job every day! Facebook commenters offered their thanks to the kind patrol officers and neighbors helping animals in need.

“I want to thank the people who stepped in to take the dog away and protect him until the police arrived. Thank you for showing such kindness and humanity. I used to live in the area, sometimes it was easier to just mind your own business than to get involved in something that could potentially bring you harm.” – Cleveland Kells via Facebook

“Thanks CPD, B4B and Officer Melbar! Cleveland is the home of some of the best people.” – Nancy Whitney via Facebook

Never hesitate to report any cruelty to animals you witness. You could be instrumental in saving a life and bringing justice to a criminal abuser!