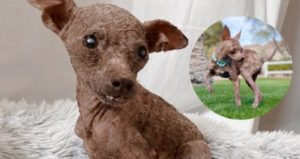 When a stray Chihuahua arrived at Maricopa County Animal Care & Control in Arizona back in October, she was in terrible condition, suffering from demodex mange. She resembled an ancient mummy far more than she did a dog. Her bone-thin body was covered in scabs. Due to her condition and her foggy eyes, this dog was labeled “at-risk” for euthanasia.

Fortunately, some kind people weren’t going to let that happen. Not to this dog who never got a fair chance. Caitlin Beall, co-founder of Sky Sanctuary Rescue, told The Dodo how much seeing a video of the Chihuahua affected her.

“When we saw the video of her at the county shelter we literally gasped. She looked awful shaking in her kennel and so very afraid. We knew she needed out and fast.”

When Beall and her co-founder Elli Smith went to pick Blondie up, they found her in poor physical condition. Blondie also had mobility issues with her back legs.

“I don’t even know how to put into words how bad her skin condition is. Her teeth were protruding out of her mouth. Her eyes were cloudy. We could see every bone in her body even under the thick layer of hardened scabs. The smell… it was overwhelming.” – Sky Sanctuary Rescue via Facebook

They immediately brought her to a veterinarian for the treatment she clearly needed.

Despite her appearance, Blondie’s rescuers had high hopes for her. They gave her that name thinking she might soon have a beautiful, full blonde coat.

Learning To Trust At Last

Beall took Blondie in as a foster. Given her past, the dog had little reason to trust anyone. She frequently hid and cowered.

Beall remembers distinctly the day she knew Blondie could learn to trust. It was after a nightly bath.

“As I removed the towel, I expected her to run from me back to her safe spot like she typically would. That night was different — she took a few steps away from me but then turned around and climbed back on to my lap. I was now her safe spot. There were a lot of happy tears that night.”

Now experiencing love and consistency, this former “mummy” of a dog is coming into her own. Her fur has slowly begun growing back too.

“Blondie is truly a whole new dog. She is so happy, loving and affectionate       . She sleeps on my pillow each night.”

Living The Life She Deserves

Blondie has been thriving in her foster home. She gets along great with the other dogs living there.

“Yesterday afternoon I walked out into the living room to find the girls cuddled up, sharing a bed. My heart melted and I tip toed out of the room trying not to wake them up—which wasn’t difficult because I think both of them are a bit hearing impaired.”

She became pretty attached to her foster mom and now struggles a bit with separation anxiety. Still, her physical condition has improved astronomically. She will require continued treatment for her eyes, and she has that now.

Blondie finally got her chance thanks to the women with Sky Sanctuary Rescue who saved her!

As to whether Beall will keep Blondie, she told The Dodo she will leave that up to Blondie herself.

“I think that answer really isn’t up to me — it’s up to Blondie. I am so proud of how far she has come. I cannot wait to see what the future has to hold for our gorgeous girl.”

The post Hairless Rescue Dog’s Transformation Will Make You Do A Double-Take appeared first on iHeartDogs.com.