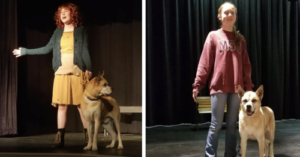 Shelby County High School in Columbiana, Alabama is working hard on a production of the musical Annie. The students decided to take their casting very seriously, especially for the dog named Sandy. For the role of Sandy, many schools just use a person dressed as a dog or even a fake dog. However, the students at this school didn’t think that was the best choice. They wanted a real dog to get a chance in the spotlight, specifically a dog that could relate to the material. So, they turned to their local humane society to find the perfect actor.

Kathryn Myrick, the theater teacher, said that the students came up with the idea to cast a shelter dog all on their own. They all desperately wanted a real dog on stage. So, they thought that would be the best way to do it. Of course, Myrick was completely on board with it.

One of the students named Savana Tarwater was especially familiar with the dogs at the Shelby Humane Society. She volunteers there often, so she picked out the perfect dog for the role. She chose Triton Daniel, a 7-year-old Husky/Boxer mix that had been at the humane society for at least 6 months.

“I’ve known this dog for over 100 days and I’ve known he is a good candidate and very sweet and gentle and nice,” said Tarwater.

Triton first came to the humane society because he was surrendered by his own family. After they got a new puppy, they brought poor Triton to the shelter. So, he can relate to Sandy in Annie. Both Triton and Sandy knew what it was like to be in need of a loving forever family.

Tarwater is in charge of training Triton for the show as well as getting him transportation to and from the school. Triton is working hard to be the best actor possible, and he is proving that shelter dogs can make the best stars.

“Annie is about second chances. It’s about acceptance and one thing I know, just from being a huge animal lover myself, is a lot of these animals need a second chance,” said Myrick.

The musical will be performed over the weekend, and everyone is excited to see Triton in the spotlight. The cast worked hard on their acting skills, but they also worked very hard to spread the word about adopting dogs. In fact, a huge goal of their performance was to find a home for Triton.

“Our goal is to find Triton Daniel, and other animals like him, a loving home,” said Myrick. “Too many animals are surrendered to the shelter for the most frivolous reasons. Animals feel sadness, pain, and joy, just as humans do, but it’s up to us to be their voice and advocate on their behalf.”

Has He Been Adopted?

The plan was to share information about how to adopt Triton at the shows. However, that won’t be necessary anymore. Word spread quickly about Triton’s situation and his new role, so a family has already adopted him!

After the final show on Sunday, Triton will head off to his new family. They are excitedly awaiting his arrival! Plus, he’ll finally get the love he truly deserves.

“When I found out he had a new home, I felt like our show [was] complete,” said Myrick.

Annie taught the students a lot about not taking things for granted, but Triton’s story taught them even more valuable lessons. They learned the importance of adoption, and they got to witness a dog finding a new home all thanks to their hard work. Every dog deserves a second chance. Triton is lucky to finally be given another chance to have a happy life.