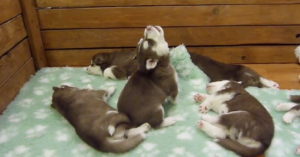 Huskies don’t just look remarkably like cuddly wolves. They’re also famous for their distinctive vocalizations and adorable howls. That sound comes to them at an early age. An adorable viral video of a husky puppy testing out his pipes really demonstrates that.

With the rest of his litter completely passed out around him, one Husky puppy has no one to play with. This won’t do, so he begins to howl his own signature howl. At several points, his tone gets a little Chewbacca-y.

Sadly, his consistent cries are no match for overwhelming puppy-strength sleepiness. His siblings don’t even open their eyes. Well, one does wiggle a little but isn’t going to get up for that.

Fortunately, these desperate Chewbacca-esque cries were productive in one way. They made for this adorable video!

Since you probably came to this post to watch the video yourself (it’s okay, I’m not that offended,) here it is:

And let me just play Netflix algorithm for you here. Husky howling videos are a whole genre, so if you liked what you just saw you might also like:

Bless this chatty breed for all the wonderful content!

Is A Husky The Right Dog For You?

Huskies were originally bred as sled dogs. They require a lot of exercise, and their person should be able to help them out with that. Under-exercised Huskies may become destructive at home.

They’d probably do best in homes with yards or access to outdoor play spaces. Be aware that due to their size, they can be escape artists.

These dogs also don’t like to be left alone for too long. Their breed is prone to separation anxiety.

Huskies also have a strong prey drive, and they’re prone to chase smaller animals. They can be socialized early to avoid these behaviors, but anyone who already has small animals might reconsider adopting an older dog of this breed.

As with adopting any dog, you should research the breed thoroughly before adopting to ensure a perfect lifelong companionship!