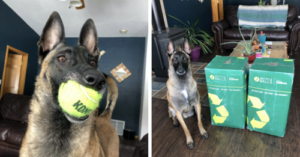 Every dog deserves an extra special birthday that they’ll never forget. That’s why Alistair Clyde had to think outside of the box for her Belgian Malinois’ big day. Titus is a young dog that still has plenty of energy in him. Therefore, his favorite thing in the world is playing fetch!

Clyde quickly realized that tennis balls were Titus’ favorite toy, so she used that as part of her birthday plan. However, she knew that a few tennis balls just wouldn’t be enough to satisfy this special pup. So, she decided on a total of 400 tennis balls!

Clyde went online to see what deals she could find on tennis balls. At first, she settled on a set of 60, but then she realized that there were much bigger sets. She could buy sets of 200 or even 400 tennis balls! So, Clyde decided to go big or go home.

Before Clyde could think about her decision, 400 tennis balls were sent her way. She was so proud of the birthday surprise that she even shared the news in the Dogspotting Society Facebook group. Many fellow dog parents found these plans to be silly and over the top, but still very sweet.

The tennis balls arrived in two large boxes. Right away, Titus knew what was in them. He refused to leave the boxes alone. He even ripped one of them open and stole two of the tennis balls!

Titus might have ruined his own birthday surprise, but that didn’t take away from the excitement of his big day. After all, Clyde still had 398 tennis balls left to surprise Titus with.

On Titus’ birthday, Clyde poured all the remaining tennis balls out of the boxes. They bounced all over the house and fell into every possible hiding space. Even though Titus already knew about the tennis balls, he still seemed completely surprised by his present.

“At first, he was a little taken aback when I dumped them,” said Clyde. “It took about five seconds for him to start running around like a maniac in excitement.”

Clyde said that while Titus was thrilled to have an abundance of tennis balls, his older brother, a Chihuahua named Bear, wasn’t impressed. He chose to just observe the chaos from a distance instead.

Even days after Titus’ birthday, the house was still full of tennis balls. Little by little, Clyde has been gathering them. She said that Titus will get to keep some of them, but she plans to donate the rest to an animal shelter. Luckily, she got Titus’ excitement on video, so they’ll never forget this special birthday gift.

Even with most of the tennis balls being donated, Titus was still spoiled with lots of other gifts for his birthday. Clyde also got him a subscription to Bark Box’s Super Chewer, a new collar, and a new dog bed. Of course, the tennis balls were by far his favorite gift though.

Happy 2nd Birthday, Titus! I got the boxes of balls from Wilson Tennis “Recycle Balls” program that donates gently used balls to nonprofits for them to sell for a good cause.