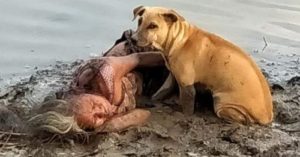 Dogs don’t need words to show when they care about people. They convey this with their bodies. For example, you might have recognized your dog guarding you. They might lie against you or stand over you. They may even growl at any movement that might be a threat.

This is a primal behavior tracing back to dogs’ wolf ancestors. Still, it really clearly shows which people a dog cares about. On March 3rd, Facebook user Ake Srisuan shared photos of two stray dogs by a riverbank. One sits close to the water and one slightly farther back. From a bit far away from the edge of the river, it’s hard to tell what the dogs are doing.

A close up paints a clearer picture. One of the dogs is visibly sitting over an elderly woman who appears to be sleeping in the mud.

Srisuwan did not have much more context for the dog’s behavior towards this woman. He was, however, very touched by this simple act of dedication.

These photos say everything: Dogs don’t have any biases. They don’t judge character based on appearances or wealth. These dogs know this woman, and they want to protect her. Even if that means getting muddy.

The Aftermath Of The Photographs

Nepali News Update reported that since the photos circulated, local authorities reached out to the woman to provide help. Reportedly, the dogs and the woman pictured received treatment.

The sweet but natural behavior of the stray dog was enough to get the pack noticed.

Why Do Our Dogs “Guard” Us?

Like I noted above, guarding is a primal behavior tracing back to dogs’ wolf ancestors. Acting protectively over this woman might have been a form of “resource guarding.” That basically stems from animals’ need to protect the things they consider valuable in the wild. Things like food and other members of their pack. It explains why some dogs growl when you approach them as they chew on toys.

Yes, our dogs love us, but you can’t deny they associate us directly with being fed. That makes us extra important to them and worth defending.

In 2018, Inside Edition performed an experiment where masked intruders burst into a couple of homes where dogs live. In a few cases, the dogs initially came to inspect the faked assault on their person. They even barked at the commotion. Still, the larger dogs expected to attack the intruder ran from the fight. Two smaller dogs surprised the investigators by forcing the “intruder” out to save their person from attack.

This isn’t really a large enough sample size for the results to be conclusive, but it does seem surprising! Evidently, this response varies from dog to dog until we have more data. But what does seem consistent is dogs’ ability to sense our emotional distress and inspect the source. Some just can’t decide whether they need to save their person or their own hide first.

As to whether the dogs pictured in the viral photos were attempting to soothe or defend, either could be true. But it sure is adorably sweet!

from iHeartDogs.com http://bit.ly/2wjN2r5
via IFTTT