Tuckered Out Pittie Pup Seeks Out Fluffiest Playmates To Nap On 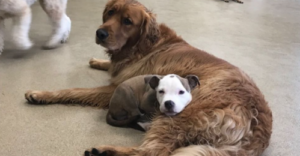 To quote that Bill Withers song, “we all need somebody to lean on.” A snuggly Pit puppy from Green Bay, Wisconsin has taken that metaphorical saying to literal extremes. Her name is Edna and she loves to lean on other dogs. Well, more like sleep on.

This smart girl manages to find the fluffiest nearby dog to lie down on. At her doggie daycare, she has many options to choose from. Photos of the tiny pup napping on her cushy friends went viral, due to them being obscenely cute. Brianna Gottfried, a human member of Edna’s family, shared the daycare pickup photos on Instagram.

“Does anyone else’s pup look for the fluffy dogs to snuggle with???” -@brigottfried/Instagram

The photos show Edna lying on top of or next to several fluffy pups. Gottfried told The Dodo her playmates don’t seem to mind. They’d play a bed for Edna anytime.

“All the dogs seem to enjoy the snuggling company. Even the tiny wiener dogs.”

To Edna, no part of the dog can’t be used as a bed. She climbs on some dogs’ backs. Other dogs’ tails serve as a cozy spot. All that matters is whether she sleeps touching another creature.

Edna doesn’t discriminate by size either. She’ll snuggle with anyone who will let her. Her mom always has to drag her away from her companion at the end of the day.

“When it’s time to go home I always have to peel her off of another dog.”

Even though Edna grew in size, her habits stayed the same. She still seeks out a fellow canine to rest her head (and body) upon. She also finds comfort with her hairless cat siblings.

Gottfried eventually took the hint and ended up making Edna her very own Instagram. Go ahead and give that a follow! I personally look forward to seeing all of her future cuddle buddies.

How could anyone look at these photos and say Pit Bulls are inherently aggressive dogs? For most of their existence, this breed went by the nickname “Nanny dogs.” Their sweet, affection nature made them great companions for children. They also make loyal, dedicated family members who aim to please.

These photos of Edna snuggling with anyone who lets her say it all. Pit Bulls make excellent cuddle buddies. Sometimes it’s just their idea first.

The post Tuckered Out Pittie Pup Seeks Out Fluffiest Playmates To Nap On appeared first on iHeartDogs.com.