UPDATE: Scout The Super Bowl Star Has Passed Away 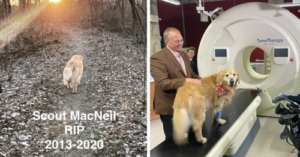 Scout is a lucky Golden Retriever that first had his moment in the spotlight during his dad’s WeatherTech Super Bowl Ad in 2019. He and his dad, David MacNeil, had a special bond, and MacNeil often referred to Scout as his “spokescanine.” It was all fun and games until Scout was diagnosed with an aggressive form of cancer, given only a 1% chance of survival. But MacNeil knew he couldn’t give up on his best friend.

In the summer of 2019, 7-year-old Scout collapsed. MacNeil rushed his beloved pup to the vet, where they found a tumor on his heart. The vets informed MacNeil that Scout had cancer. They guessed that he only had about one month left to live.

MacNeil was heartbroken after hearing this news. However, he knew this wasn’t the end for Scout. When MacNeil looked down at his furry friend, he saw a happy dog with a tail that wouldn’t stop wagging. MacNeil knew that Scout still had plenty of life left in him.

MacNeil had already lost three other dogs to cancer in his lifetime. He refused to give up on Scout without a fight. So, he visited the University of Wisconsin School of Veterinary Medicine for help.

Despite having only a 1% chance of survival, the doctors at the veterinary school agreed to help Scout. They treated him with aggressive chemotherapy and radiation, which nearly eradicated his tumor.

Thanks to the fantastic vets at this school, Scout survived well past one month. MacNeil can’t thank them enough for their kindness and hard work. So, he decided to spread the word with a grand gesture.

MacNeil decided to purchase a $6 million Super Bowl ad. He used this ad share Scout’s story, thank the amazing people who saved his life, and encourage others to donate to help dogs like Scout.

During the second quarter of the 2020 Super Bowl, a 30-second ad called “Lucky Dog” aired. It explained Scout’s cancer treatment journey and encouraged others to help raise money for the University of Wisconsin School of Veterinary Medicine.

“Scout’s illness devastated us,” MacNeil said. “We wanted this year’s Super Bowl effort to not only raise awareness, but also financial support for the incredible research and innovative treatments happening at the University of Wisconsin School of Veterinary Medicine, where Scout is still a patient.”

Scout still had plenty of vet visits and rounds of radiation therapy ahead of him, but things were looking much better. These incredible vets knew that this sweet Golden Retriever was worth it. They helped Scout defy all odds and continue living despite everything he’d been through. That’s why MacNeil was so determined to share this incredible story on live television.

“This is an amazing opportunity not only for the University of Wisconsin–Madison and the School of Veterinary Medicine, but for veterinary medicine worldwide,” said Mark Markel, the dean of the school.

Unfortunately, about 2 months after the commercial was featured on the Super Bowl, Scout crossed the rainbow bridge. Cancer tumors had started to bleed around his heart and lungs. Scout fought hard until the very end, but it was his time to go. The sweet Golden Retriever had lived a happy and fulfilling life thanks to the vets at the university, but now he was ready to go to a place where he’d no longer have to fight cancer.

“Of course there is much sadness as he will be unbelievably missed, but we have so much to be grateful for because we knew his sweet and loving soul. Sweet is just the beginning when describing Scout,” MacNeil wrote on Scout’s Instagram. “He was something larger than life that is hard to put into words. Kind, loving, caring, joyful, happy, intuitive, and brave are just a few. Nonetheless, he had an ability to reach right into your heart and make you feel loved. He lived to love and to be loved. “

Scout will be missed greatly, but his story will continue to inspire others. MacNeil and Scout had a very close bond, and they were determined to not give up on each other. Scout’s life might have been shorter than he’d hoped, but he got to accomplish so much during his time on Earth. He helped spread awareness about dogs with cancer as well as recognize the kind people who helped keep him going.

If you want to help make a difference for dogs like Scout, please donate to this amazing veterinary school. It’s important to support them and spread awareness because they can do so much to help dogs in need.

The post UPDATE: Scout The Super Bowl Star Has Passed Away appeared first on iHeartDogs.com.