Small But Mighty Dachshund Has A Passion For Big Sticks 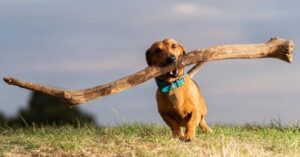 Bosco the Dachshund’s motto is “bark softly and carry a big stick!” The London-based pooch has a passion for sticks, but not just any stick will do. Bosco prefers massive branches and chunks of wood several times his own size.

Most folks he encounters on his daily walks find his habit amusing, but there are times when it gets him into trouble.

According to his mom, Ana-Luccia Iannucci Rodriguez, Bosco often blocks the path of other park-goers with his massive slabs of lumber. You see, Bosco isn’t into chewing sticks, he’s into carrying them everywhere he goes.

As his tail whips with delight, he marches along walking paths with about three feet of stick “sticking” out on each side! Even when he nearly trips a jogger or knocks a child off a scooter, They find it hard to be angry with Bosco.

“People are amazed that such a little dog is so strong and ambitious,” Anna Luccia tells Metro UK. “He is such a character that people can’t help but warm to him.”

That warmth extends beyond the folks he encounters on his walks. Bosco has 100,000 devoted followers on his Instagram page, @BoscoAndHisBigStick.

“Over time we have built a loving audience who leave lots of comments and send me messages of support,” says Anna Luccia. “Some write they were having a rough day but seeing Bosco, his joy and funny antics, makes them feel better.”

“If I happen to not post for a day or two, I always have someone asking where his videos are. People also send us pictures or tag Bosco in their stories of their dogs carrying sticks, so it’s like he’s started a little trend there. That’s pretty cool to see.”

Anna Luccia says 3-year-old Bosco’s passion for sticks began when he was just a pup. While fallen branches are clearly his favorite, he also enjoys carrying other “objects of treasure” such as tires and umbrellas. On one occasion he proudly pranced along with a child’s plastic scooter. Another time it was a department store dummy!

Bosco’s mom is quick to point out that she never forces him to carry anything. She believes he genuinely loves the challenge, and thrives on hunting out the biggest and best sticks. There may also be another reason.

“He also loves getting reactions from people, whether it’s claps, people smiling and talking to him or people getting their phones out to film or take pictures of him,” Anna Luccia reports. “He will turn his head and give them a glance. He is an attention seeker at home and in public and a big part of why he does it at all is for a reaction, perhaps not at the beginning but definitely now.”

Bosco prefers to think of his habit as a passion more than an obsession. After all, he does occasionally lay down his branch in favor of a good digging session or game of fetch. But sticks will always be his first, and greatest love.

The post Small But Mighty Dachshund Has A Passion For Big Sticks appeared first on iHeartDogs.com.