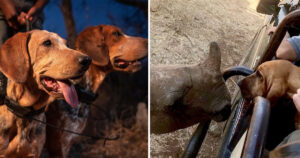 Dogs can be trained to perform the most incredible tasks. Some dogs can sniff out medical issues. Some can carry massive loads. And some specially-trained dogs even make a big impact on the endangered African Rhino population. Southern African Wildlife College‘s anti-poaching K9 unit is a pack of dogs selected for their particular tracking abilities to protect endangered wildlife. They perform several valuable functions in the preservation of the area’s biodiversity.

South Africa holds nearly 80% of the world’s rhinoceroses. It also experiences extremely high poaching rates. The past decade saw over 8,000 poaching-related rhino deaths. Thanks to these incredible dogs, poaching rates are on the decline! What’s more, they bring the people responsible for these crimes to justice.

Dogs trained at this school basically begin right at birth. They’re socialized from a very young age according to Johan van Straaten, a K-9 Master at the college.

‘They learn how to track, bay at a person in a tree and follow basic obedience. At six months we put all that training together more formally – they do have the necessary skill set to do the work at a younger age but are not mature enough to handle all the pressures of real operations.”

Their readiness to go out and work depends on many factors. Typically though, these dogs are prepared to fight the good fight at around 18 months old.

Their lifestyles are not too dissimilar from human athletes. They also subsist on individually customized diets and train every single day. These dogs were pretty much born to be conservationists!

Once trained, the K-9 unit dogs can track a scent to help locate suspects on the move. They can also lead rangers and enforcement authorities to suspects or at least indicate their movements. Dogs are stationed with trained field rangers at key locations in case they detect the scent of animal products.

These dogs can also sniff out rhino calves orphaned by poaching and rescue them before it’s too late. Calves rescued by the K-9 unit go to Care for Wild Rhino Sanctuary. There the dogs protect these rhinos as part of their patrol duties.

“Reaper and his fellow K9 team members patrol the fence lines 24/7 with their highly trained and experienced handlers. They are also highly skilled in vehicle searches as well as tracking and apprehension. The K-9 unit is a force multiplier and an invaluable asset in keeping the rhinos safe.” -@CareForWild via Instagram

Since dogs can run much faster than people, they have an advantage in tracking. This endurance, speed, and agility make a huge difference.

“The game changer has been the free tracking dogs who are able to track at speeds much faster than a human can in terrain where the best human trackers would lose spoor.”

Plus, their amazing noses can sniff out poachers based on their tracks 75-80% of the time. That’s much greater than the 6% success rate of human tracking, even via car or helicopter. The Wildlife College shared their impressive record of apprehending criminal poachers on Instagram.

“Working in close collaboration with partners and law enforcement officials in the Greater Kruger area, the unit’s involvement in the apprehension of over 100 poachers in the past sixteen months is unprecedented. This translates into more than six arrests per month!”

I guess dogs are an African Rhino’s best friend too. Keep up the good work pups!