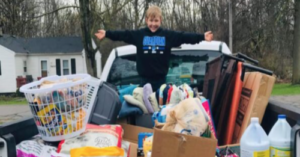 In another story of humans helping others during this difficult time, a 9-year-old Michigan boy set out to raise money to purchase donations for his local animal shelter. His goal was mighty, but he surpassed it and even had enough leftover to help out the hardworking staff, too. Young Dylan’s story is an inspiration to us all.

Dylan Made Signs Asking for Donations

The young philanthropist made signs that he placed at strategic locations around town. The sign asked people to donate to help animals in need. His goal was lofty but with the help of his parents and generous community members, he exceeded his goal! He even purchased pizza for all the hardworking shelter staff members to say thanks for all that they do to help animals in need.

His Goal Was to Fill up His Dad’s Truck

Dylan set a very big goal for his fundraiser. He aimed to raise enough money to buy enough supplies to fill up the bed of his dad’s pick up truck. He called the campaign “Dylan’s Let’s Fill Up My Dad’s Truck Pet Food and Supply Drive.” The shelter reported on their Facebook page, “A big THANK YOU to young Dylan Lowery and his Mom. 👍 At only 9 years old Dylan took it upon himself to collect up donations for the shelter, and boy did he ever!!!! Good job, and thanks again to the Lowery family.”

A staff member commented, “Thank you for all the goodies for the dogs and cats!!! And thank you Mandy and Dylan for lunch for us today too!!! GREAT JOB Dylan you rock buddy!!!”

This is Not the First Time Dylan Has Helped Others

Click On Detroit reported that Dylan raised money to help a family in need get Christmas gifts a couple of years ago. At the age of just 7 years old, Dylan played the guitar around his neighborhood, earning a whopping $900. He used that money to buy a Christmas meal and gifts for a single mother and her three children. He dropped off the gifts to the delighted family on Christmas Eve.

The world is a better place because of generous souls like young Dylan Lowrey. This pandemic is undoubtedly awful and we all wish we could move on with our lives. However, we see time and again how it is bringing out the best in people. Way to go, Dylan!

The post 9-Year-Old Raises Funds To Donate A Truckload Of Supplies To Local Shelter appeared first on iHeartDogs.com.