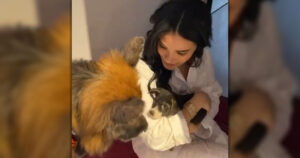 As a former foster parent, I can tell you fostering an animal is a wonderful thing to do. It gives homeless animals better chances at adoption and it takes them out of shelters and puts them into loving homes, even for a bit. However, there are times when fostering can be terribly hard too.

Love Marie Ongpauco-Escudero, otherwise known in the Philippine entertainment industry as Heart Evangelista, spilled some sad truth about a fostering experience in her recent vlog. Through tears, Evangelista revealed her latest foster dog Linda had crossed the Rainbow Bridge.

“I was only with her for half a day, but I’ve never been so attached to a foster. I usually foster a lot, but this one was extra special, and I actually thought of keeping her but she died. She had complications.”

Of course, being a vlogger and well-known personality usually means maintaining a persona for the cameras. Evangelista admitted that she just couldn’t do that right now.

“I don’t really share moments when I’m so freakin’ ugly and I’m just so sad. I tried to stay very positive with my vlogs all the time, but I just wanted to say that fostering is really hard.”

Having to say goodbye to a foster animal adopted away from you usually creates a bittersweet moment. Losing a dog entirely feels far worse, she wrote on Instagram.

“It’s always hard to give them away, but it’s the first time I feel like I failed. I’ve had cases of unhealthy dogs but they always seem to survive. Never lost a pup.”

Heart Evangelista is a long-time ambassador of the Philippine Animal Welfare Society (PAWS.) She even established her own animal welfare facility in Sorsogon in 2019.

Evangelista started fostering animals when she was only 13 years old. The actress and model often nurses strays back to health so they can find their forever homes. She’s usually surrounded by animals.

Though losing Linda hurt badly, she continues to advocate for fostering.

“Despite the heartaches, I do still very much support the idea of fostering. It’s just very hard because she was really such an angel.”

The silver lining to this sad situation is that Linda spent her last days showered with love instead of on a cold shelter floor.

“When I look back, I’m glad that even if I was with her for half a day, I was able to make her feel really loved.”

Without animal advocates like Heart Evangelista, many dogs would end up meeting much sadder fates. Thank you to foster parents everywhere for your hard work and dedication to furry friends!