Bertie is a 10 month old male Patterdale Terrier being fostered in Gloucestershire in family home with teenager, 3 dogs and two cats. He came into our care recently with his brother – the family they came from were struggling with the pair of them together and felt they were out of their depth, they did love them both and did the right thing in handing them over to rescue to be assessed so they could placed correctly. They were assessed prior to them coming in and with their owner – their owner unfortunately was not very confident with them both together and because of this would avoid other dogs if they were coming towards them or pick the dogs up – this unfortunately had resulted in both dogs not being very confident when together and as soon as a dog appeared they both would bark and were very nervous feeding of their owner and each other so the whole situation was beginning to become a nightmare so we made the decision to split the brothers up and put them in separate foster homes with more confident dogs to help them. 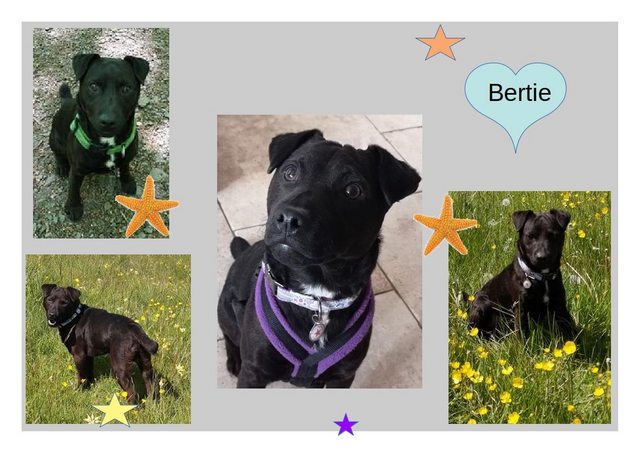 Little Bertie has had his foster home falling in love with him, wary at first with him they took it very slowly because of him being so nervous but as he has settled he character is starting to show through. To be honest the way I am going to describe this little dog who is nothing really like a terrier let alone a Patterdale and he is very different to his brother.

Bertie when he arrived was very nervous of our dogs, we have a 2 year old working cocker who is a bit crazy and two older dogs both big Lab mixes at 14 and 12. These dogs are very used to dogs coming and going and just ignored Bertie when he came in even the young one and he really was very frightened, not sure if was bullied by his brother but he is very sensitive little dog with an old soul.

As the days went on he became more confident – he is now relaxed around them but still not playing with the young one but he will lay with him now and relaxed, he is the one Bertie is exercised with, travels with in the car, he looks to him and gets his confidence from him when out.

This little dog really does not have a bad bone in his body – in fact if I could keep him I would but its not the right time, even though scared he has never gone for the other dogs he will run away if anything, he has been fab with the cats and is such an easy dog to live with. He is relaxed around the house – he adores his cuddles, house trained, sleeps in his crate at night with the others in the kitchen without any problems.

I have now walked him with a small pack of dogs in a very remote area so we did not meet anyone else and it did not take him long to settle down into the walk, he refused to join in the playing and would come and hide behind me but was very relaxed walking and pottering around with them which was a big improvement for him.

In the woods opposite our house there are lots of dogs, ones that people have no control over and twice dogs have rushed up to him and this is what he finds really scary and one of these times he just ran home. He finds it difficult walking where there are lots of other dogs and will continually look around and be worried but I am working on this and its such early days but he is getting there but the new owner will have to continue with this.

He has also started jogging with me, the other dog and does really well at that – he follows the other dogs lead and although I have only done it a couple of times each time he has improved and his confidence.

A very sweet loving little gentle dog who needs an experienced home to help him through his issue with being so scared when other dogs around, its important he gets over this so his life can be more enjoyable as he deserves this and he will need another dog to help him with this but it has to be a dog that will give him space – an older dog would be fine as he would not pester or a younger one as long as they would leave him alone and let him come round in his own time which he will as used to play with his brother.

A quiet home would suit him better with teenagers or just adult as he is a quiet dog, people who do not live in a busy town, a country home would be preferred – he loves going out in the car and just loves being with you i don’t want him left for hours every day and he would not cope with a dog walker, doggy daycare, or different people coming in – he deserves the perfect match and we will hold onto him until that happens.

Bertie is neutered now, vaccinated chipped and been fleaed and wormed. Please email us in the first instance for our questionnaire so we can learn more about you and the home you can offer him.