Chris Evans’ Rescue Dog Is Embarrassed Of His Quarantine Cut 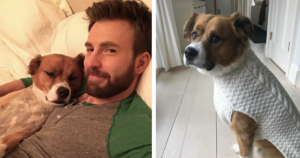 During the COVID-19 pandemic, many people have become victims of “quarantine cuts”. With no hairdressers open, it seems logical to try trimming your hair yourself, but it very rarely works out in your favor. The same is true for at-home dog grooming.

Captain America actor Chris Evans thought he could give his rescue dog, Dodger, a nice spa day during the quarantine. He figured a little trim on his furry friend’s coat would be easy. As it turns out, he couldn’t have been more wrong.

Evans is a very devoted dog dad. He adopted Dodger back in 2017 after meeting him in a shelter while filming the movie Gifted. Right away, he felt a special connection to the dog. He knew he couldn’t leave that shelter without bringing Dodger with him.

RELATED: Chris Evans And His Rescue Dog Have The Best Quarantine Advice

Since Evans and Dodger are so close, it’s easy for Evans to think he knows best about everything dog-related. He usually takes Dodger to a dog groomer to be pampered, but his groomer was closed due to the pandemic. So, Evans figured that he could easily groom the pup himself. After all, he didn’t have much else going on.

However, as soon as Evans started trimming Dodger’s fur, he already knew he made a big mistake.

When Evans was finished grooming Dodger, the poor pup had an embarrassing bald spot on his side. It turned out even worse than Evans could’ve imagined.

“I assured him I knew what I was doing. He seemed skeptical at first, but with the help of a few treats, I talked him into it,” Evans wrote on Twitter. “It went so wrong, so fast. I guess some things are better left to the professionals.”

Evans shared a photo of Dodger’s failed grooming on Twitter. Sure enough, it’s just as bad as he made it sound. Luckily, his fur will grow back, so Dodger won’t have to deal with the embarrassment for too long. At least the haircut brought a good laugh to many loyal fans.

“He hasn’t seen a mirror yet. I told him it looks great,” Evans wrote.

Luckily, Evans still has an adorable cable-knit sweater for Dodger that matches his sweater from the film Knives Out. Maybe he can use it to cover Dodger’s bad hair days for now. When Dodger does see himself in the mirror, hopefully, he will be able to see the humor of it too. And when Dodger’s actual groomer reopens, he’ll never take their services for granted again!

The post Chris Evans’ Rescue Dog Is Embarrassed Of His Quarantine Cut appeared first on iHeartDogs.com.