Construction Workers Save Dog Who Was On The Brink Of Death 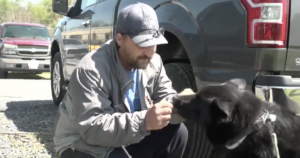 Jett the 3-year-old German Shepherd was playing fetch with his family just like any other day. He was playing with Bliss Nuckols at their home, happily chasing the same ball over and over again. But then, the unthinkable happened.

During the innocent game of catch, Jett somehow swallowed the ball. Nuckols panicked, trying to dislodge the ball from the dog’s throat, but it was stuck. Poor Jett struggled to breathe. Nuckols quickly called Teresa Perkins, who was Nuckols and Jett’s mom, to explain the situation.

Rushing to the Vet

When Perkins heard that her sweet dog was in danger, she rushed home as fast as she could. She called the vet as she drove home, and they told her to bring Jett in right away. So, as soon as she got home, she and Nuckols rushed Jett into the car. Perkins took off for the vet faster than she had ever driven before.

Perkins sped down the road with Jett gasping for air in the back seat. She knew she was driving much faster than she should’ve been, but she feared for her dog’s life. She was getting close to her destination, but then she got caught in traffic. There was construction on the road with no faster way around it.

While they were stopped in traffic, she noticed that Jett’s breathing was getting worse. He kept gasping for breath, and then, he stopped. Perkins worried that it was too late.

So, she stopped the car and looked for help right then and there. She approached Jay Johnson and Cavaja Holt, two men that were working at the construction site, and begged for their help. They had a hard time understanding her through all the panic and tears, but when she led them to Jett, they knew they had to do something.

A Life-Saving Act of Kindness

As Holt and Johnson inspected the limp dog, Perkins tried her best to explain the situation to them. Without hesitation, Holt opened the dog’s mouth as wide as he could and pulled the tennis ball out. Unfortunately, Jett still wasn’t breathing though.

Then, Johnson suggested that they try CPR on the dog. So, Holt began blowing in Jett’s mouth and doing compressions. At first, it seemed hopeless, but then, the dog lifted his head. Jett was breathing again!

“He would’ve died if I didn’t stop,” said Perkins. “He would have been dead. If I had driven 10 more minutes, he wouldn’t have made it.”

Perkins thanked the men over and over again, and then she continued to the vet to make sure Jett was okay. After meeting with the vet, it was confirmed that the dog was healthy enough to go home. The construction workers had saved his life.

After everything Jett went through, Perkins still wanted to thank the men even further. So, Nuckols made a post on Facebook to try and find the construction workers for her mom. As it turns out, Holt had also made a post trying to find Perkins. He wanted to make sure that Jett was still doing well.

Holt and Perkins were connected through social media in no time. The next day, they met in person so Perkins could properly thank him again. Holt and Johnson were just relieved to know that Jett was okay. They never expected something so crazy to happen that day, but now they were heroes.

The post Construction Workers Save Dog Who Was On The Brink Of Death appeared first on iHeartDogs.com.

from iHeartDogs.com https://bit.ly/3dsR7cp
via IFTTT