Diesel is a 5 month old male Standard Poodle cross English Springer Spaniel. He has been surrendered into rescue because his family were struggling with some of his behaviour; he acts out quite badly when trying to put a collar or harness on, or when trying to attach a lead to his collar. He becomes very distressed and will bite in an attempt to get you to stop. His family employed a behaviourist who had been working with them for a month seeing them weekly and had helped them desensitise him to having a slip lead on. Unfortunately they did not feel confident enough to walk him and the result was that he was not walked for over a month. Diesel was purchased from a home breeder at 8 weeks old, his owners had him fully vaccinated but there was a delay in getting the second vaccine so Diesel was not able to be walked until he was 12/13 weeks old, this may have been a contributing factor to his lack of early social development and the reason why he is now so anxious. 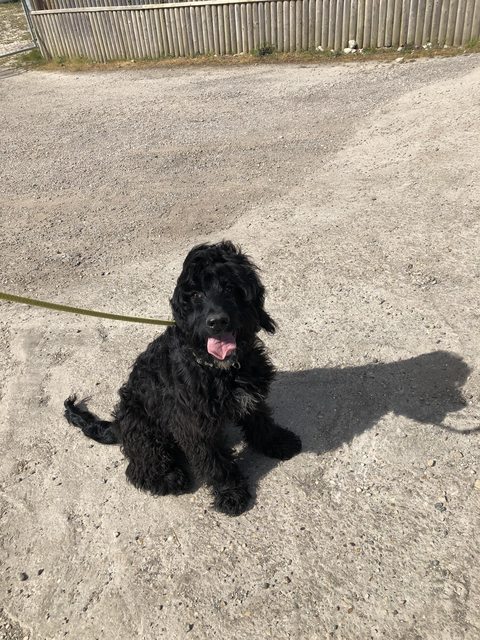 Diesels owners took him to the vets for a check up but this was a highly stressful situation for him and, at the request of the vet, the owner tried to muzzle him, this resulted in Diesel biting his owner and the vet sedating him so he could be examined where no physical issues where found. On the same evening of vet visit the 8 year old child in the home touched Diesels collar while he was lay with the adult owner resulting in him biting and breaking the skin of the child. The family came to the heartbreaking decision to rehome him. The owners had also not been able to groom him or take him to a groomers but did do lots of mental stimulation with him and play with him in the garden, he knows his basic commands and he is extremely bright and learns quickly. 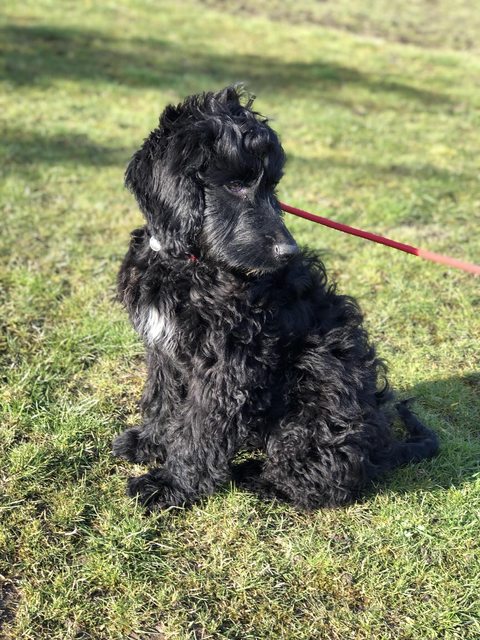 We have been working very hard with Diesel using desensitisation tactics and redirection alongside praise and positive reinforcement. He is responding very well and will now tolerate having a collar on aswell as a slip lead. He is still nervous at the sight of both but is coming on slowly. We have been moving slowly towards him wearing a harness but are finding he is most confident wearing a slip lead so would advise this going forward whilst continuing desensitisation towards his harness. His main fear is having it put over his head or adjusted to size. He does not like when people hesitate, this makes him anxious but if you calmly go for it he is not as bad. He takes a lot of confidence from his handler but occasionally will turn to mouth when he is uncomfortable with the situation but he is not jumping straight to biting anymore. This is great progress for him but potential adopters will need at accept that we cannot rule this out. Especially in a new situation with new handlers. 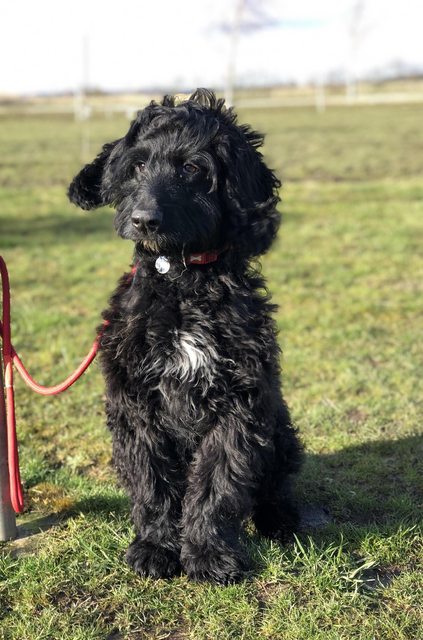 It is hard to fully dissect where this behavior has arisen from for him to have such strong fearful feelings towards collars/leads/harnesses. We think he has had an incredibly bad experience when he was younger by getting his collar caught on something, traumatising himself in the process. This is a very deep rooted fear ingrained into him and needs overlaying with careful training. Mishandling him, inexperienced input or clumsy corrections at this point will be incredibly detrimental to the progress he has made and his progression in the future. Because of this we will only accept applications who can demonstrate the experience and ability to take Diesel forward in the right direction he needs and continue with the training the rescue has put in place here.

It will not come as a surprise that Diesel has a lot of trust issues and does not initially present as a normal 5 month old puppy. He is fearful and reactive to strangers that come into his space and attempt to handle him, however when he knows you he is comfortable and relaxed in your company. He is such a giant goofy baby when he forgets himself and we love seeing him acting like a puppy here. He will be such a rewarding boy in the correct home.

We feel Diesel would do well in a home with another confident dog to learn from. He’s very playful, and is having a blast with a 10 month old Cockapoo we have in currently. Getting him to follow the lead of a confident dog is even better in regards to his training. Diesel needs a home that is experienced with fear aggressionand happy to continue with the training the rescue has put in place here. Due to his lack of signals, of being touched suddenly and the fact he has a bite history we cannot accept applications from homes with visiting or resident children under 13. He is a sweet boy who loves people and really wants to please, he’s silly and playful and will really flourish in the right home. Diesel will benefit from a home that is active; when he’s out he loves to walk and when he’s regularly exercised his resource guarding behaviour improves dramatically. A tired dog is a happy dog we always say. He also would be a fantastic candidate for something like Cani cross.

Diesel will need to be neutered via contract when old enough – proof will be required, he is vaccinated and microchipped.