Earl is a sweet 9 year old male Cross-Breed.  Theea rescued him quite some time ago from a kill shelter where he had spent one and a half years of his life. She had taken him to the vet several times as he had an old, bad fracture and was told nothing needed to be done, but Earl was clearly troubled with pain in his leg. The only solution was to have the leg amputated. The surgery appeared to have gone well, but soon after returning to Theea, Earl stopped eating. It turned out that the wound was not healing well, so poor Earl has had to go back to the vets, where stayed for a week to recuperate. 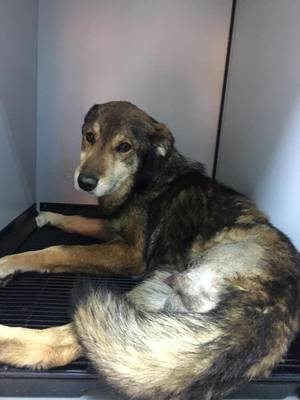 Now he should at last be free of pain for the first time in years. Earl so much deserves a calm, loving home to retire in. Earl walks nicely on the lead. We think he would be best as an only dog. Current location Romania but collect from Wellington Somerset.