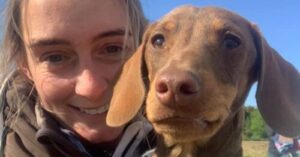 If only recovering a lost dog when you spot one was as simple as scooping them up and bringing them back home. The truth is, running towards a frightened lost dog can often make the situation worse. The dog might bolt or even lash out. Sometimes you have to get creative, and you especially have to be patient.

That’s what a family in the UK had to do when their poor puppy fled their farm. Floyd, a seven-month-old Dachshund, ran from his home in Middleton Tyas when another dog’s barks frightened him.

Fern Holmes, his mom, worried about her tiny baby being out in the cold, alone. She asked her community for help online, and they delivered. Holmes told The Northern Echo what a team effort locating the missing Floyd was.

“The amount of people who shared the post and all my friends and family who were out looking for him and strangers ringing and asking where they should go and search was unbelievable.”

The family and volunteers set up cameras around the farm. At one point, Floyd appeared on one of them, but then there were no sightings for a few days. They left food and water out for him, but worried he’d never come back.

“By that point I thought we’re not going to find him – this is a dog who normally sleeps on a bed under a duvet, he’s only seven months old and I thought, how could he survive out there? Particularly with how cold it’s been, especially on a night.”

The couple whipped out some bacon and cooked it on disposable barbecue grills, hoping the smell would attract Floyd. They also brought their other dog along thinking Floyd might recognize his scent too.

Finally, a farmer spotted Floyd from his tractor. The family created a scent field to draw Floyd towards them.

Then, at last, they spotted the tiny dog from down the field. He saw them too, but wasn’t sure if it was really his family. No one approached, not wanting to startle the frightened Floyd.

“Before he finally came over it was pretty traumatic and emotional but it was amazing he came back. I just wanted to run over and get him but I knew how scared he must have been so we just sat waiting and hoping and praying that he would recognise us and come back to us.”

Eventually, Floyd seemed to understand. He began to pick up speed, heading towards them as they calmly called. Finally close enough to recognize his family, Floyd lost it with excitement.

He began to yelp and squeak, ecstatically licking everyone and wagging his tail like crazy.

You really have to see the emotional reunion for yourself (and hear those tiny whimpers!) You can watch it here.

Why will your lost dog not come to you straight away – meet Floyd the missing Sausage dog! Floyd is a seven month old puppy who was out on a walk with his owners when he was frightened by three other dogs, which caused him to bolt into a vast rural area.At some stage in the search for a lost dog, owners will be advised to not shout or chase their dog, which is met with disbelief, “My dog always listens and will come back if they can hear me”. Whilst we, as humans, think this to be true, the dog, whom is lost, will not. At this point it is important to not humanise the situation your dog is in – you are not looking for YOUR lost dog, you are looking for a dog that is lost. This change in the thought process is not a reflection of any owner or their bond with their dog, it’s about the dog whom is lost. ��For three days, the tried and tested search protocols were carried out for Floyd, as advised by The Lost Dog Trapping Team, including two key ones; 1. Scenting, which involved the owners walking around set area’s to allow their human scent to guide Floyd back.2. To spread the message that should Floyd be seen, he must not be approached, called or chased but that people should follow the STOP DROP THINK method. A method which can seem counter intuitive to people, especially for a puppy whom had been missing for three days. Don’t understand why? This is where knowing about canines and survival mode is vital and can help you find your lost dog quicker and help keep them safe. A canine that has gone into survival mode prioritises these things; survival, food, water and shelter. When they are in this state, every human is viewed as a predator, even the one that has fed, loved and walked them for the last 2-4-12 years. It is not the owners fault and it is not the dogs fault, it is simply a lost dog. �Research has located a point in the canine brain that responds to the scent of familiar humans, much more strongly than it does to the scent of other humans or familiar dogs. Your lost dog will be trying to find you, by scent, rather than by sound or sight. Whilst its instinct to ask people to help search for your dog, it’s also wise to wait and hold of that search party to allow your dog to find you, without being presented with ‘scary’ people your dog does not know whom are also introducing unfamiliar scents to the area. ��Calling a lost dog by name, or whistling for them can have a negative result, the result often being they are pushed away from their location. The lost dog does not know whom is calling them, they heard a noise, saw it as a threat and moved on which results in owners have to start the search all over again. As an owner, walking around the area your dog was seen to a point you want them to come back to, such as the missing point, is key. This will help your lost dog track back, such as in Floyd’s case. He was seen some distance away from his missing point, but came back to this area as his owners scent was there. ��This was not the end of Floyd’s journey. Imagine seeing your missing dog, after three days, thinking they would be unable to survive for those long cold nights alone, all you want to do is run up and grab them. This is the situation Floyd’s owners, and many owners across the country are often presented with and it’s one of the most crucial. Floyd’s owners followed the advice to stay low, to not call or shout Floyd and make no sudden movements. For forty long minutes, Floyd was in their sights, he was carefully assessing the situation and the environment around him. Were these humans to be trusted? ��The video, which has been cut short, demonstrates the behaviour of a lost dog when presented with his owners, whom he knew well and whom he trusted. It took him forty minutes of investigating from a distance whilst they stayed low to the ground and let Floyd figure it out on his own. You can imagine how hard this will have been for them, but if they had not done this, Floyd would have bolted and probably would have left the area all together. This video documents the final part of Floyd’s journey to be reunited with his owners, even the part where his owners saw the ‘lightbulb’ moment where Floyd picked up his owners scent which enabled him to trust the humans he was presented with and make that final journey, safe into his owners arms. ��Floyd’s journey can help many owners who are in the same position, so please share and educate members of the public about the STOP – DROP – THINK aka REMEMBER FLOYD protocol. ��Welcome home Floyd!

Fortunately, Floyd’s family had some great support behind them. Holmes had nothing but praise for volunteer Mandy Butler and The Lost Dog Trapping Team.

“Mandy was amazing. Her advice was incredible – I wouldn’t have thought to have barbecues – and putting the cameras out and everything. She’d even suggested putting a drone up and it is all for free because they are volunteers. They are amazing.”

Floyd’s collar will now be equipped with a tracking device, just in case. Thankfully he’s back to being a duvet-napping indoors pup.

Here’s to the power of community and the smell of bacon!