Happy Ending For Dog Abused By A Woman’s Ex-Boyfriend 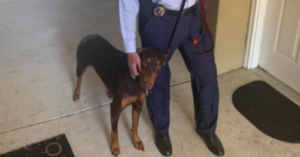 Breaking up is hard to do. Sometimes, a guy goes to great lengths to punish the woman who dumped him. That’s what happened when an estranged ex-boyfriend stole and abused a woman’s dog. But don’t worry, he’s going to get what he deserves. Ruby Jean is a gorgeous Doberman Pinscher and thankfully, her story has a very happy ending.

Doorbell cameras are an very popular security feature in homes across the country. They allow people to see who is coming to their door, when a package gets delivered, or, in this case, when a jilted ex-boyfriend kidnaps and abuses your beloved dog. The woman captured disturbing footage of her ex-boyfriend wrapping a leash around her dog Ruby Jean’s neck, tightening it as if he meant to choke her to death. He left with the dog.

Ruby Jean’s mom posted the footage of the abuse on Facebook, pleading with her followers to help bring Ruby Jean home. She wanted her dog back and she wanted her ex-boyfriend arrested for animal abuse. The video has since been taken down but it got the attention of local police, who opened a case and started looking for their suspect.

Police Confirmed They Were Hunting Down the Abuser

The Slidell Police Department was made aware of the video and they took action right away. The department posted to Facebook, “Slidell Police is very well aware of the Ring doorbell video involving a man abusing a dog. This situation is not being taken lightly. The report was filed yesterday and is ACTIVELY being investigated.”

Ruby Jean Was Found and the Ex Was Arrested

It didn’t take Slidell police long to find their suspect. WBRZ reported that he was arrested and charged with animal cruelty. He made it very easy for police to charge him by inflicting his cruelty in front of a doorbell camera. Ruby Jean was returned to her mom, where she belongs. Naturally, the police and Ruby Jean’s mom are thrilled with the outcome.

It Only Took Police a Few Hours to Find Him

The woman reported to police that her ex-boyfriend was holding Ruby Jean hostage as a way to get back at her for breaking up with him. Apparently the former couple had been arguing and breaking up when the man left, taking the dog with him. The Slidell Police Department confirmed to WBRZ that it was looking into the incident. The suspect was  identified as Shane Mitchell. It took police just a few hours to apprehend him. He was booked into the Slidell Jail on charges of cruelty to animals. Police also quickly secured a court order to have Ruby Jean returned to her “rightful owner.”

Mitchell is surely regretting his choices to abuse and kidnap a beloved pet. Hopefully his punishment will deter him from ever pulling a horrific stunt like this again.

The post Happy Ending For Dog Abused By A Woman’s Ex-Boyfriend appeared first on iHeartDogs.com.