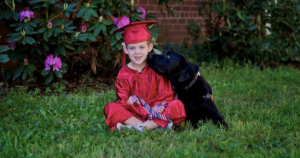 Back in early 2019, the Bowling family had a goal. They wanted to get a service dog for their 4-year-old son, Mason Bowling, but they didn’t have enough money. Mason has autism and a genetic chromosome disorder, so they thought a service dog would help him in his daily life.

However, an autism service dog costs about $25,000, so they had to find a way to get that much money. To their surprise, they received an incredible amount of support. Many kind community members helped raise money to get Mason’s new service dog named Kevin.

Additionally, Mason’s service dog would also be trained in search and rescue to help prevent Mason from getting lost. Danielle thought that all these skills sounded perfect for Mason, but they still had to find a way to get the money.

So, Danielle created a Facebook group to help reach out to the community. In the group, she shared charity events for Mason as well as updates on their progress.

At first, donations came in slowly, but every day, more and more people stepped up to help. Damon Johnson, a former professional basketball player, even organized a special charity event to help Mason. Johnson set up a charity basketball tournament, raising thousands of dollars for Mason’s service dog.

“I hope that this brings attention to autism, attention to kids that need dogs, and attention to the fact that dogs are there to help kids in this situation,” Johnson said before the event.

Thanks to Johnson’s help and the generous donations of many other community members, Mason eventually met his goal. All the family’s dreams were about to come true!

Now, Mason is 6 years old, and he finally brought Kevin home in April. Kevin is an adorable black Lab who is being trained specifically to help Mason. Currently, Kevin is working on controlling Mason’s meltdowns and aggression, along with helping his social interactions. He’s even being trained for search and rescue and for retrieving medication just in case either is needed in the future.

Even though Kevin has only lived with the family for a short amount of time so far, he has already bonded with Mason. The sweet dog is already adjusting to Mason’s lifestyle, and he seems to feel comfortable with his new family.

“I hope that he is understood better, by [Kevin] calming him,” said Danielle. “We’ve tried everything and nothing seems to work. We’re in hopes that this will be it.”

Mason even got to graduate Kindergarten with his new best friend by his side. His family took plenty of adorable graduation photos of the two of them together. It might’ve been a long and difficult journey to bring Mason and Kevin together, but judging by the happiness on their faces, all the hard work was worth it. Congratulations Mason and Kevin!

The post Kind Community Comes Together To Get 6-Year-Old An Autism Service Dog appeared first on iHeartDogs.com.