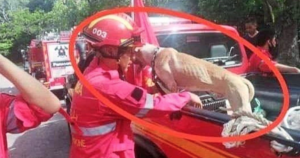 If staying at home has made you feel a bit claustrophobic, you don’t know the half of it. Imagine how a poor dog trapped in a ravine in Malaysia felt. On May 4th, the dog fell into the ravine in Tanjung Bungah, a suburb of George Town in Penang, Malaysia. The weather was a bit wet, and that made the rocks slippery and dangerous to climb on. No one could free the little guy without risk of injury.

The nearest fire station received a distress call regarding the poor trapped dog at 2:32 pm. About 10 minutes later, they were on the scene. 10 firefighters were deployed to the dog’s location, as well as Mount Erskine voluntary firefighters. This challenging task required many hands, and even some machinery.

“Upon arriving, we found that the dog had fallen into the ravine which was about 30 meters (100 feet) below. After a size-up, we decided to make a pulley system so that our men could go down and bring the dog up to safety.”

From start to finish, the entire rescue operation spanned about two and a half hours. Eventually, the firefighters retrieved the dog and brought it to safety. The poor thing was skin and bones. Hopefully, the media attention from the rescue catches a potential adopter’s eye!

I bet we can all agree, dogs are worth this kind of effort. Facebook commenters praised the dedication and humanity of the rescue team.

“How civilized a society is reflected in the way they treat the animals…thank you very much Bomba.” – NG Teck Lai via Facebook

“We proud of you for saving the dog, although it’s just an animal but still is a life. This is a very good example that some Asia countries doesn’t have. May god keep you and your team safe.” – James Ong via Facebook

“Thank you so much for your kind efforts! From all of Msia’s animal lovers.” – Samantha Lee via Facebook

While we’re taking the time to appreciate first responders and emergency workers, this story hits the spot. The firefighters who rushed to this dog’s aid used all their resources to save a life.

Though you might have the instinct to jump right to the aid of a dog in distress, sometimes these situations are best left to the professionals. Thank you, heroes!