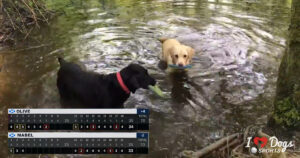 The world is in a bit of a lull right now as the threat of the coronavirus looms. Many sources of entertainment remain shut down. Movie theatres are closed, beaches are closed, and even sporting events have been canceled! But, thanks to sportscaster Andrew Cotter, we can all enjoy a bit of live sports from the comfort of our couches again!

If You Didn’t Think Commentary Was Necessary For Sports, Think Again

It might not be the kind of sporting event that you’re used to, but it’s the kind you never knew you needed. You see, Cotter has one of those perfect voices for commentating. His Scottish brogue and calm inflection leave you hanging on the edge of your seat. Cotter consistently has a hysterically accurate choice of words that sucks you into the action, even if that action is simply a dog chewing on a toy! We guarantee you never realized how much action commentary adds to sports until you’ve seen his videos.

Just while I wait for them to have an actual rematch. pic.twitter.com/yVsaXD9bNS

A Dynamic Duo Perhaps More Iconic Than Venus And Serena

Cotter is the dog dad to Olive and Mabel. The pair are iconic. They’re the Venus and Serena Williams of dogs. Cotter’s boredom set in recently as he began narrating his dogs’ daily activities. You might think events, like standing in a murky pond or eating a bowl of kibble, would be about as entertaining as watching the grass grow, but Cotter is here to prove that theory so very wrong.

“How fitting that it should come down to these two. Olive and her familiar black, five times the champion. Mabel, the rising star, winner last year. You can see how excited they are but also feel the tension,” Cotter eloquently rolled off his tongue as he filmed his two dogs sitting on a patio.

In the background, a woman’s voice could be heard telling him to, “Get on with it!”

I think after the last month, we can all relate to the mystery woman.

“And now they go, Olive away first but a problem with Mabel’s bowl. That might cost her now having to play catch up. Both settling quickly into rhythm. You can see the contrast in styles, Mabel heavy tail use, happy to be alive, everything’s amazing. Olive, more steady, wasting little energy, very much of the old Labrador school, serious business,” Cotter announced as his dogs dove into their food bowls.

When you watch the video, you can’t help but find yourself closely watching every morsel of food get swooped up by each dog until both bowls are empty. It might even be more exciting than watching the third turn of the Kentucky Derby- all thanks to the swift commentary.

A Chew Toy Pressure Cooker That Ran Out The Clock

The real nail biter was when Olive was steadily holding onto her toy. Young Mabel looked on, playing it cool, waiting for the perfect time to steal the toy from her sister like a seasoned NASCAR driver waiting to make the perfect pass.

“Into the final minutes and Olive in possession but this is where Mabel is strong, chasing the game using that intensity. We saw it in the semi-final, staring at a slightly torn cloth rabbit for over seven and a half minutes,” Cotter quietly narrated as Olive kept a tight bite on her toy while Mabel looked on forlornly. “And perhaps a few signs of overconfidence from her rival, a bit of showboating, needs to be careful,” he kept on as Olive began to shake her head and wag her tail with the toy still in her clutch.

As you listen to the event unfolding, you quickly find yourself immersed in their living room, waiting for the moment Mabel makes her move. When she finally does, her dad was there to capture the moment perfectly.

Some sports are slower. More about the strategy. pic.twitter.com/JMBaGJ1tSd

We might not all be fans of golf or rugby, but I think we can all agree that Andrew Cotter’s dog commentary and his adorable athletes are the coronavirus relief we all needed!