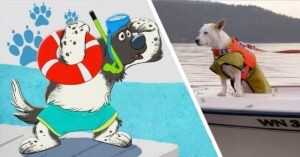 Whether or not you have heard of Bill Farmer, you definitely know his voice. He’s responsible for Pluto’s bark, Goofy’s bumbling speech, and the voices of many other Disney characters over the past 30 years.

Now, Farmer is working in front of the camera to bring recognition to some of America’s most amazing real-life dogs.

His new show, It’s A Dog Life, is currently available on the Disney+ streaming service and features talented working dogs from across the country. In each of the ten episodes, Farmer showcases two dogs with a variety of fun, heroic, and downright strange jobs.

“There are so many jobs dogs can and do for us,” Farmer said in an interview with Fox 5 Atlanta. “It blew my mind.”

Fun For The Whole Family

While It’s A Dog’s Life is meant to educate children, pup lovers of all ages will delight in learning the many ways dogs around the country work for their kibble!

For example, beekeeping dogs are trained to sense deadly diseases that could potentially wipe out a hive. With essential pollinators rapidly heading toward extinction, these dogs are literally working to save the world.

Other pups, like rescue mutt Eba, can sniff out floating masses of whale poop in the Pacific Ocean, helping researchers at the University of Washington get to the bottom of the declining Southern Resident killer whale population.

But the series is not all doom and gloom. There is plenty of heartwarming cuteness to behold. Take the pooches of the Cincinnati Zoo. When they’re just puppies, these rescue dogs are matched with baby cheetahs to provide vital socialization to the cubs as they grow.

“They come to love each other,” Farmer told PEOPLE of the sibling-like bond that forms between the animals.

Farmer hopes the show will inspire a new generation of dog lovers to appreciate and care for canines, especially those of the rescue variety.

“About 90% of the dogs featured on the show are rescue dogs,” he said.

Check out a preview of It’s A Dog’s Life below.

The first episode premiered on Disney+ last week. A new one will be available every Friday for the following nine weeks.