Not Even Peanut Butter Can Get This Husky In The Tub 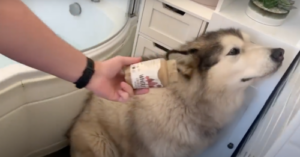 Bath time can be easy and fun. Or it can be a real challenge. Some dogs have no problem hopping into the tub or shower, while others would rather do just about anything but endure a soaking and scrubbing. In a wildly popular video that has been seen over 6.5 million times in a matter of days, Phil the Alaskan Malamute hilariously sulks his way through bath time.

As you can see, Phil is a huge dog. His coat is incredibly thick. His dog parents know that he needs a bath. Even the cat and baby sister seem to agree. It’s gotta happen, Phil! But Phil is not having it. He spends the first half of the video doing everything he can to avoid getting into the tub. He sits and stares at the wall, pretending his family isn’t there.

He tries to crawl under his baby sister’s bouncy chair, hoping she will not give his hiding spot away to their insistent parents. He even goes so far as to put his front legs on the side of the tub but then gives his family pleading looks, begging one more time to be spared from his inevitable fate.

His dad even tries to lure him with peanut butter, feeding him some licks with his fingers and then smearing it on the wall of the tub. Although Phil seems to enjoy the taste like all dogs, he’s not falling for this trick. He does his best to ignore the offer, staring intently at the wall, willing himself to resist.

The beautiful bouncing baby is getting a real kick out of this whole thing. Her parents even comment at one point that she herself gets a bath nearly every night. She must be wondering what the big deal is with her big, furry brother. Phil does eventually get into the tub, making everyone happy. However, he starts up his sulking and whining and never stops. His dad points out how filthy the water is that is running off of Phil’s body. A bath was clearly in order. But Phil can’t handle it.

Phil is soaking wet and wants to do what all dogs do in that state. He wants to shake head to toe! He tries, but his dad puts a firm hand on his back and tells him, “no.” Phil whines and shimmies his body up and down in a hilarious display of denied full-body shaking. The cat spectates, knowing full well how lucky she is not to have to get baths this way. She also delights in stealing many of the treats the parents have placed around the bathroom to lure Phil into the tub.

Bathing our dogs is something we all have to do. Some of us get lucky and have dogs that take it in stride or even enjoy it! Others of us have a Phil. Thanks to the family for sharing their hilarious struggle to get Phil bathed.

The post Not Even Peanut Butter Can Get This Husky In The Tub appeared first on iHeartDogs.com.

from iHeartDogs.com https://bit.ly/2ywidk4
via IFTTT