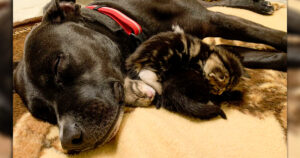 If gossip is to be believed, “Cats vs. Dogs” is a battle for the ages. It’s a story told over and over again, about how the two species can’t tolerate each other, much less be friends. But as true dog lovers know, our canine pals have a heart big enough to love any creature that crosses their path – and that includes the feline kind.

It seems to be the dogs who needed love most that have the most to give. Mack, a sweet-faced blue Pit/Lab mix, had an unfortunate beginning. He now lives a much happier life with his human, Analisa Trstensky, but she tells iHeartDogs that he hadn’t always been so lucky. At only one-and-a-half years old, Mack had already sustained a lifetime’s worth of scars and injuries – both inside and out.

“The first year and a half of Mack’s life was downright terrible, however, I did not find out most of the details until a few months after I adopted him. He had some small scars on his face, and his elbows and knees were bare/scabbed over from laying in the dirt, so I knew it was bad, just not how bad.

“Mack and his brother were tied to a tree with hardly any food or water. The owner kept trying to rehome them, but somehow, they kept returning. The shelter finally stepped in. His brother was adopted shortly after, but Mack was labeled as aggressive and was added to the list to be euthanized. Chris [a shelter employee,] noticed that although Mack was aggressive while in the kennel, he was also soiling himself out of fear. That’s when Chris stepped in and asked the shelter for the opportunity to work with Mack before any final decisions were made.”

For four months, Chris worked with Mack to teach him to trust and come out of his shell. Mack made huge strides in Chris’s care, and almost immediately after joining his foster home, his forever human spotted him online.

Analisa Trstensky and her cat, Bowser, were living a busy life in Tallahassee. But she had always grown up with animals in her home and has an especially soft spot for rescue animals.

“I don’t think there’s an animal my parents wouldn’t rescue when I was growing up. When I was younger, we took in an orphaned fawn named Freckles. We currently have 3 rescued pot-bellied pigs. We have a horse farm, and stray and feral cats use the barn for shelter, so when I was younger I would always catch the feral kittens. I swear, the hissier the better! I loved turning them from these wild children into these snuggly purring cuddlers. We would adopt them out, but there’s also been a few foster fails!

“I honestly wasn’t looking for a dog at the time! Bowser and I were living in a town house in Tallahassee, and I was working for a college athletic department and knew I didn’t have time for a puppy. For some reason, I followed the local shelter on Facebook (apparently, I like to torture myself) and saw his post on July 3rd. His picture caught my eye, but the description is what caught my heart. How could a dog with such an awful life still be so grateful to humans? I began emailing back and forth with his foster mom, and he sounded too good to be true. He was potty trained, crate trained, good with her dogs, and had basic obedience skills! When I finally got the opportunity to meet him on the 7th, he definitely played hard to get. He sat a few feet away from me, but his tail was wagging the whole time. Five minutes later, I was filling out the paperwork making us a family!

“I was really surprised at how big of an interest I took in him almost immediately. I’ve never been interested in having a pit. It wasn’t that I was afraid of the stereotype, as I grew up with the most loving Rottweiler ever, I just honestly never knew a pit personally and didn’t have an opinion on them one way or another.

“In January, we were sitting outside of the shelter waiting for obedience class to begin. Mack is a laidback dog and never pulled on his leash. A shelter employee was leaving, and Mack dragged me across the parking lot and started jumping all over this guy. Very weird because Mack was just getting over his fear of strange men, and he was over the moon happy to see this guy! Chris asked if this was Dwight, so I said ‘yes, but he’s now known as Mack.’

“Turns out Chris was the person who saved his life, and he filled me in on all of the details. If it weren’t for Chris stepping up, Mack wouldn’t be here today, and I am so grateful for him.”

Though Analisa felt a strong connection almost right away with Mack, he still needed to pass the Bowser-test. Bowser had once been a “little wild man” who lived in a feral colony in Analisa’s hometown. She wasn’t sure how the two would get along, but the best she hoped for was a rocky adjustment period followed by friendship – but Mack and Bowser surprised her immediately!

“It went surprisingly well! I brought Mack home and Bowser walked right up to him and they went nose to nose.”

Bowser was no stranger to dogs, and his curiosity took over when the new pup walked into their home. They hit it off right away, and in less than 24 hours, had claimed each other as family.

“I have absolutely no doubt in my mind that they were supposed to find each other and become brothers. I think the first time I was really like ‘wow, this is going to be something special’ was when I was cleaning out Mack’s crate. I was vacuuming the bed and looked over and both of them were in the crate together. That’s when I knew Bowser trusted Mack. They really do act like brothers.”

Mack seems to have a special charm for cats. As a foster, Analisa often has tiny kittens in her home, and no one seems more interested in raising them than Mack does! When the first litter came home, Mack very carefully introduced himself under Analisa’s careful supervision.

You may want to share this with anyone who thinks Pit Bulls are inherently dangerous – Mack is proof that these big, sweet pups are just as kindhearted and gentle as any other breed.

“He always had the option to play with them and then if he was over it, he could leave at any time. A lot of the time, he would look at me, look at the kittens and then look at me again like he was asking ‘Is this okay? Am I doing alright?’ and he is always rewarded for his good behavior.”

Together, Mack and Bowser help Analisa raise kittens that learn to trust and love regardless of species – throwing that old cat-vs-dog stereotype out of the window!

Looking at Mack now, you’d never guess that he had ever been so badly hurt. Thanks to the love of the kind humans who saved him – and his kitty brother Bowser, Mack has put his past far, far behind him. The future is filled with love, cuddles, and tiny, furry kittens.

“Mack had such a lousy start to life, but he never let that break him. He has the happiest soul I have ever encountered and just enjoys life. He looks at me with the most pure love. He also does everything 110% of the way whether it’s playing fetch, de-fluffing toys or taking care of his babies.”

Keep up with Bowser, Mack, and their tiny kitty cuties on Instagram!