Oscar is a 8 year old male Bichon Frise. He is somewhat of a troubled little lad who has had multiple homes and been passed around a lot further adding to his insecurities. His issues are complex but manageable, he just needs confident handlers and measures put in place in order for him to succeed. Oscar is a resource guarder. For those who don’t know Resource guarding refers to a dog displaying behavior (growling, snapping, etc.) intended to convince other dogs or humans to stay away from a particular treasure or “resource.” The resource can be food, treats, toys, a place (a bed or favorite chair), or occasionally a person. 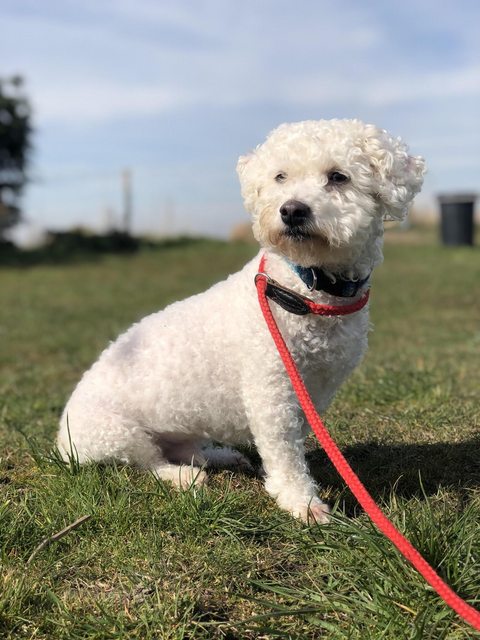 Oscar’s resources are toys and food. There are two separate issues here which I will address individually. The first is toys; In order for Oscar to succeed in a home he absolutely cannot have any toys. He has no desire to play with them and does not appear to know what to do with them but does however like to guard them. He doesn’t appear to know why he is doing what he is doing and is torn between wanting to be close to you (which is his favorite thing) and wanting to protect his resource. If he’s allowed to have toys he will insist on sitting as close to you as possible whilst guarding his toys but will snap if he is touched whilst in possession of them. It is a catch 22 really. The simple way around this is to remove the problem altogether and just not give him toys. This in turn sets him up to succeed and removes the urge to guard. He does not guard space, beds or people and considering this is an easy external resource to remove it is a simple fix.

Oscars other resource is food. Oscar is a complete foodie. He appears to have been fed human food and scraps and watches you constantly whilst you eat. He is an absolute scavenger and will bin dive, he appears permanently hungry and is always on the look out for something to steal. When he successfully manages this he will guard it. He stole a chocolate bar in his last home and bit when they attempted to remove it from him. This can be managed by ensuring bins are away and secure and he has no access to steal other food items. He does not guard his own food at mealtimes and takes treats nicely however would guard high value things like bones and chews so would not be allowed these. Any treats that he would be required to work on should be ruled out. 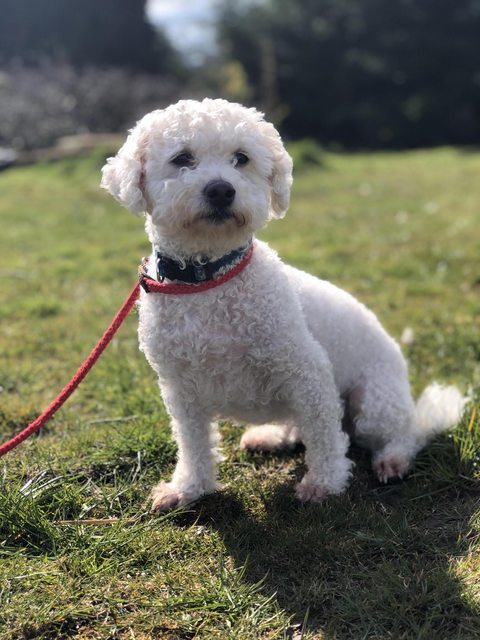 Oscar arrived yeasty and itchy. He had horrific infections in both ears; they were filled with puss, were ulcerated and bleeding and pink stained paws he was licking constantly. His family had been trying to manage it with Harrington’s grain free but being so sensitive this was not sufficient enough to combat these allergies. Oscar needs to be on a strict diet that supports his immune system, he is currently on nutriment raw food which is wheat and grain free and he is thriving. We had his ears flushed and treated under GA and since going onto raw he had stopped itching and licking. He is definitely more comfortable now but the limitations of his diet do cause him to scavenge more because he is not used to not filling up on human food.

Oscar has been very spoilt over his lifetime and does not like to go on walks. He’s quite lazy for a bichon and will refuse point blank to go out of the house. If he is Carried out and then walked he walks very nicely on the lead but will refuse if lead out of the house. Oscar gets on well with the dogs here but can be problematic over toys and food as noted before. He will intimidate dogs over their toys and then guard them intensely when he obtains them. Because of this he will be better suited to being an only dog or being part of a household with other dogs that does not have access to toys or high value bones and chews. Aside from stealing toys he gets on really well with other dogs. 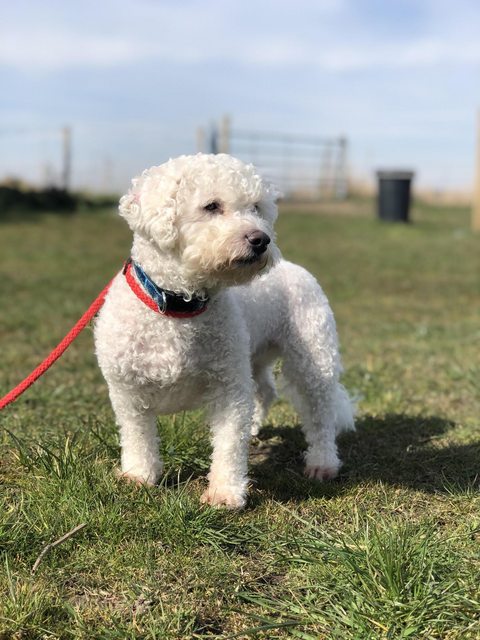 Oscar needs a home that is experienced with resource guarding and happy to continue with the training the rescue has put in place here. Due to his lack of signals, of being touched suddenly and the fact he has a bite history we cannot accept applications from homes with visiting or resident children under 13. He is a sweet boy who loves people and having a back scratch , he’s silly and playful and will really flourish in the right home. Oscar will benefit from a home that is active despite his aversion to leaving the house; he loves to walk when he is out and when he’s regularly exercised his resource guarding behaviour improves dramatically. A tired dog is a happy dog we always say. If he does not have toys and no access to steal food then half the battle is already won.

Oscar is neutered, vaccinated and microchipped. Please send us a direct Facebook message to enquire about our adoption process as we don’t always catch comments on the posts. We require an APPLICATION and HOMECHECK BEFORE we can arrange for applicants to meet Oscar on an APPOINTMENT ONLY basis. Minimum adoption donation applied.