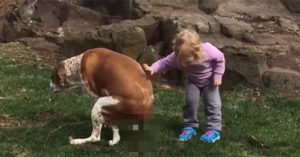 I was out in the yard this morning doing my business. The birds were chirping. The cool dew and crisp grass felt good on my paws. I locked eyes with a squirrel that I planned to chase later, and I had spun around in just enough circles to optimally align myself for my morning constitutional. My back was hunched. My tail was stabilizing my body for what was about to happen. My stance was top-notch.

Then I saw it: my dad. He was watching me like a frickin’ hawk. Like the way I watch a slice of cheese go on a sandwich. The way a sniper watches his target. He was just staring at me – through me – like he had no soul. Nobody with a soul watches another creature do such things.

Bathroom Envy Is A Real Thing, My Furry Friends

In the past, this has sent my business right back up north, leaving me with a belly ache and an emergency by mid-afternoon. But today, I decided to take a stand… or, a squat rather. I locked eyes with my peeping Tom (no, really, his name is Tom), and I let it fly. I figured that would make him not want to look at me while I’m trying to drop the kids off at the dog park.

It begs the question though, “Why?” Why do our humans keep watching us go potty? Not only is it a complete invasion of privacy, but it’s R-U-D-E. RUDE. I did some research though. I consulted the great psychologist Ivan Pavlov. You know, that guy who had some dogs. It only made sense that he would be able to tell me why our humans want to watch us potty since he understands brains and dogs… or maybe it was dog brains… I’m not sure.

Anyway, Pavlov’s book said that humans are “watchers” because they’re envious of our freedom. Kind of ironic, isn’t it? The people who can walk out the front door without a leash, and eat whatever they want to whenever they want to, are jealous of us. Can you blame them? It’s pretty nice to be able to drop brown bombs anywhere in the house when we’re mad. And, there’s nothing quite like feeling the gentle breeze on your bum while you sniff the wind! Don’t believe me? Here’s an actual diagram Pavlov drew while conducting his research:

“What we have is a privacy issue really. Dogs across the globe are having their basic rights to privacy completely pounced on,” said Sherry Shetland, head Sheepdog at the Canine Courtesy Institute. “Can’t a dog poop in peace?”

Some pups are even considering taking things one step further. There are reports of an underground movement to stage a coup. A group of Irish Setters has organized the movement in an attempt to demand rights and enact policy that has the #1 goal of giving us privacy when we go #2. Seems a bit much, but if coups are your thing, I know a guy. As for me, I’m just going to keep doing my business as usual. If the humans want something to watch, they can have a front-row seat to see the show at my Shih Tzu!

Until next time, this is Barnaby signing-off. And remember, if you hike your leg more than twice, you’re only fooling yourself.