Puppy Has Ongoing Dispute With The Quaker Oats Man 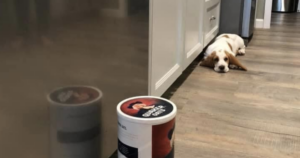 Opal the Basset Hound puppy is usually very brave. However, she’s also very mischievous. She likes to explore and cause trouble. Her family had a hard time keeping her in her place at first. That is, until they discovered her nemesis: the Quaker Oats man.

For some reason, Opal can’t stand the mascot’s white hair and fancy hat. Whenever she sees him, she either runs in fear or barks at him. She tries her best to stand up for herself, but she just can’t deny that the Quaker Oats man is spooky!

The Start of Their Rivalry

When Opal first met the Quaker Oats man, her mom thought it would be a fun and innocent experience. She found a can of Quaker Oats that she assumed the pup would love to chase. However, as soon as she rolled the can toward Opal, the puppy freaked out. Opal ran away in fear as she barked to scare the intruder.

Of course, Opal’s mom never meant to scare her sweet puppy, so she quickly hid the Quaker Oats can from Opal. For a while, the Quaker Oats man hid inside a cupboard, out of sight and out of mind for the puppy. It stayed that way until Opal’s mom went out of town for a few days.

“I stayed with my sister, dad, and Opal to help out while [Mom] was out of town,” said daughter Addie Crawford. “Opal was not happy that my mom ‘abandoned’ us, so she started some questionable new quirks to show us that she was less than content that Mom left.”

Suddenly, Opal began stealing dish towels off the dishwasher’s handle. She would take them and hide them near her dog bed out of spite. Her family was not amused, so they called upon an old friend to handle the situation.

Unfortunately, the Quaker Oats man won against Opal yet again. As soon as Crawford placed the can in front of the dishwasher, Opal stopped stealing towels. In fact, she did everything in her power to avoid the Quaker Oats can at all costs. She would often go out of her way to walk around it, and sometimes she’d even stop to bark at her enemy.

But sadly, Opal has still never won a fight against the evil Quaker Oats man. He continues to stand guard of the dishtowel, which only makes the scared puppy even more furious. Sometimes, Opal’s mom will even tease her by saying, “The Quaker is going to get you!”

Thanks to the Quaker Oats man, the dish towels are now safe from Opal. But for Opal, this feud isn’t over. Recently, she started stealing pieces of dirty laundry and hiding them under the kitchen table. It looks like the Quaker Oats man will soon have to guard the laundry basket too. Perhaps the family will need to buy a second Quaker Oats can to keep all their fabric safe.

The post Puppy Has Ongoing Dispute With The Quaker Oats Man appeared first on iHeartDogs.com.