Rescue Dog On Britain’s Got Talent Moves Judges To Tears 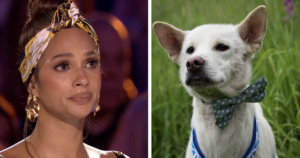 Amanda Leask is the proud mom of 40 amazing dogs. Many of them have heartwarming rescue stories, but none of their pasts are more emotional than Miracle’s. The beautiful white dog truly lives up to his name because of his amazing transformation since adoption.

To show off his progress, Miracle joined Leask on the show Britain’s Got Talent. They performed a stunning magic trick together, and Leask shared Miracle’s story to show others how important dog adoption is.

Leask wished she could bring all 40 of her dogs on the show, but it just wasn’t possible. So, she brought Miracle along with 4 others, who patiently waited backstage. During their performance, Leask brought the judges a stack of 40 cards, each with a picture of one of her dogs on it.

Each judge picked a card and looked at it. Then, after sharing Miracle’s story and explaining why she has so many dogs, Leask told the judges to reveal their cards. Sure enough, those four cards matched the four dogs that Leask brought with her.

Miracle opened a door leading backstage to allow his 4 siblings to run out and take the stage. The judges were in awe when they saw the same dogs pictured on their cards. Of course, they were also moved to tears by the cuteness, especially when they saw the two-legged pup named Braveheart.

As amazing as the trick was, the judges and the audience were even more amazed by the story behind it. Before revealing her dogs, Leask showed a video explaining why she chose Miracle to help her with this trick.

Miracle looks like a very happy and healthy dog, but he wasn’t always that way. Leask found out about the beautiful pup when she came across a horrifying photo. She saw poor Miracle stuffed in a cage with over 100 other dogs, being sold in Thailand’s illegal dog meat trade.

On the show, Leask showed before and after photos of Miracle, and the transformation was incredible. In the first photo, Miracle is trying to escape the cage, but he got stuck in the process. His rescuers feared that he was dead at first, until he finally opened his eyes. It was a miracle he survived the terrible situation.

With so many dogs rescued from the meat trade, it was hard for Leask to find Miracle. But she felt a strong connection to him, so she knew she had to save him. Finally, volunteers were able to rescue him and bring him to Leask in the United Kingdom. It was the first time Miracle had ever been in a home.

Since Miracle was new to the family, Leask was careful to make sure he was comfortable. She didn’t know how he would react to her son and other dogs, so she gave him some space at first. However, she soon learned that he was the sweetest, most gentle dog she had ever met.

Her 11-year-old son, who has cerebral palsy and autism, is sometimes unsure around the dogs. However, he bonded with Miracle almost immediately. Miracle knows exactly how to comfort him and cheer him up, and he makes Miracle happy in return. Seeing this bond made Leask even more grateful that she had been able to save Miracle.

Will They Win the Show?

After their heartwarming and incredible performance, all four judges said yes without hesitation. They were all in tears after Miracle’s story. Not only was the pair’s talent amazing, but the judges agreed that it was a great way to raise awareness about rescue dogs.

“If Miracle and I won Britain’s Got Talent, it would be absolutely phenomenal to think that a rescue dog would perform in front of the royal family,” said Leask.

Dog lovers all over the world are thrilled to see what exciting performance Leask and Miracle will come up with next. If they can win this competition, then it could be an incredible way to spread the word about rescue dogs even further. To find out more about Miracle’s story, check out his book!

The post Rescue Dog On Britain’s Got Talent Moves Judges To Tears appeared first on iHeartDogs.com.