Rescue Dog Saves The Life Of His Favorite Mailman 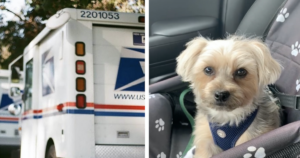 A lot of dogs bark at the mailman or even fear them. The idea of a stranger constantly approaching their home is just so threatening to them. But for Bowie, a Yorkshire Terrier and Bichon Frise mix from New Jersey, the mailman is his best friend. The little rescue dog gets excited every time William Morgan stops by to drop off the mail.

Morgan is one of the kindest mailmen around. He knows the names of all the dogs in the neighborhood, and he often brings residents treats for the holidays. So, when Bowie suspected that Morgan was in trouble, he rushed to save him.

Cyndi Dawson, Bowie’s mom, was spending her quarantine relaxing. She was sitting in bed, reading a book peacefully. But then, Bowie ran up to her and nipped at her pants while barking. It was very unlike him.

At first, Dawson thought Bowie just wanted to play. She wasn’t in the mood to get up, but Bowie was persistent. He kept pulling at her pants leg, trying to lead her toward the door. Dawson grew even more confused, but she followed him, thinking he just had to use the bathroom.

As Dawson approached the door, she noticed that the mail truck was outside. Since Bowie adores Morgan so much, she let him outside so he could go say hi. But that’s when things suddenly took an unusual turn.

The mail truck seemed to have run into her husband’s car and she could see Morgan’s legs hanging out the side of the truck. She called to the mailman, but there was no response. Meanwhile, Bowie raced to the truck and began barking like crazy. That’s when Dawson knew that something was terribly wrong.

Dawson discovered that Morgan was lying down on the seat, unconscious. He was barely breathing, so she rushed to the house to call 9-1-1 while Bowie guarded his friend.

If it hadn’t been for Bowie, it’s likely that no one would’ve noticed Morgan in the truck. In fact, Dawson had no idea how long he had been like that before she called 9-1-1. Luckily, an ambulance was able to rush to the scene and bring him to safety.

Morgan had been dealing with pre-existing medical conditions before this incident. Over a year ago, he had melanoma in his skin that had been taken out. Now, he had it in his brain. His recovery will be long and expensive, but Dawson and the rest of the neighborhood are helping in any way that they can. After all, he was always so kind to them.

“Our mailman is special. This is a special neighborhood I live in. It’s a little enclave, kind of in a world of its own. We’re all very close here. Bill has been part of us for 20 years or more. He’s a friend besides being a mailman,” Dawson said.

When Morgan found out that Bowie was the one that saved him, he was extremely grateful. He had always loved the little dog, and he was amazed that Bowie had sensed he was in trouble. Morgan added that he is feeling much better now, but he still has a long recovery ahead of him. He’s unsure if he’ll be able to return to work after this.

Dawson organized a GoFundMe to help support Morgan’s medical bills. After only one day, they already raised over $1,000! Please donate if you’d like to help this kind mailman during these difficult times.

The post Rescue Dog Saves The Life Of His Favorite Mailman appeared first on iHeartDogs.com.