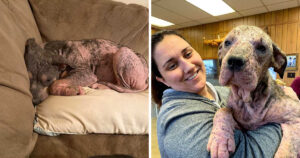 Lauren Buckley is a long-time friend and foster with the Brown Dog Coalition in Hopkinton, MA. Her story originally appeared on LoveWhatMatters.com, and is reposted here with her permission.

“Months ago, on Christmas Eve, I was scrolling through Facebook when I saw a post about two abandoned dogs. The gentleman who found the dogs (and who we later named Lainey and Frankie) was begging for help.

He had found them in a ditch down the road from his house and had no idea what to do with them. Despite our plans to travel over the New Year, we knew we had to help these dogs. We proceeded to bring them home and hold our breath for the next 36 hours until our vet opened—we were afraid Lainey would succumb to her infections.

She looked like an alien creature. She stunk, she couldn’t see, and she bled all over our couch.

To our delight, Lainey not only survived, but thrived in our home. With the help of frequent vet visits, antibiotics, ivermectin, and twice-weekly medicated baths, her infections began to clear.

Her hair grew back, and her spirit was revived. We then learned who the real Lainey was: a funny, loving girl who had never had the chance to be a puppy. It was finally her time to enjoy life as a real dog! And that is exactly what she did and continues to do.

Four months flew by and before we knew it, our once stinky, swollen foster dog was ready to find her forever family. The timing couldn’t have been more serendipitous as a good friend of ours, Kelly, was looking for a companion.

We were ecstatic to find out she was interested in Lainey and had been following our pictures and posts about her progress. After sending additional details, pictures, and videos, Kelly and her husband, Larry, were smitten and we began arranging her adoption.

Lainey, now Luna, lives the spoiled life in Georgia with her parents and three cat siblings. We could not have asked for a better life for her.

We’d also like to take the time to say thank you to Brown Dog Coalition out of Hopkinton, MA. They answered our Christmas Eve call for help and paid for all of her veterinary care. They rescue countless dogs and cats from southern states each year, many with major medical needs, and never spare any cost. They are an incredible group of people who we are extremely grateful to know and work alongside with.”

The post Sad Pup Who Only Knew Neglect Thrives With Just A Little Love appeared first on iHeartDogs.com.

from iHeartDogs.com https://bit.ly/2zh4T30
via IFTTT