There’s a common assumption that women show more love and affection to their dogs than men. However, if that’s what you believe, then you might want to think again! A survey conducted by Volvo Car USA and the Harris Poll revealed some shocking news.

The survey showed that millennial men, which the Pew Research Center defined as men born between 1981 and 1996, are more likely to pamper their pups than millennial women. It might seem hard to believe, but the results don’t lie. Being a dog dad is cooler than ever now.

“Pampering” can mean a lot of different things for dogs though. It could simply mean buying more expensive food or spoiling your dogs with extra treats and toys. It could also consist of throwing birthday parties for your dog and giving them spa treatments. If you consistently go above and beyond for your dog, then they are probably one pampered pooch. 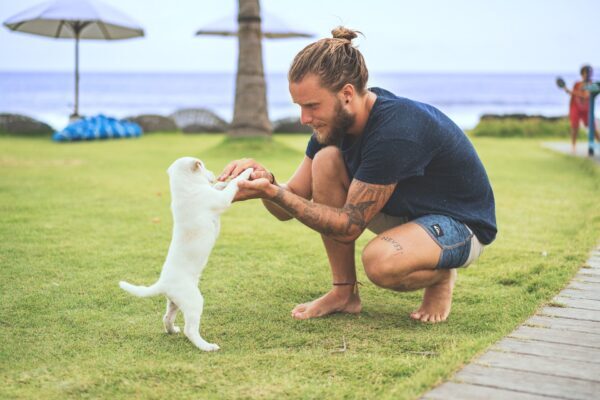 The results of the poll showed that 39% of male millennials bought a specialty or organic food for their dog. Surprisingly, only 29% of millennial women did the same. Plus, only 27% of all the dog parents surveyed fed their dogs a more expensive diet. Clearly, millennial men care a lot more about their dog’s health than expected.

This survey also found that men were more likely to do other expensive things for their dogs such as take them to daycare or throw parties for them. In fact, 30% of millennial men have birthday parties for their furry friends. Only 17% of the woman surveyed would do the same. According to this survey, dogs truly are man’s best friend.

However, there was one particular category in which millennial women scored higher. Millennial women are more than twice as likely to create a social media account for their dog. This was compared to the millennial men surveyed and all the dog parents surveyed in general. After all, dog social media accounts have become more and more popular every year because it’s so hard to resist looking at adorable photos and videos of dogs. While this survey shows that millennial men tend to pamper their dogs more than women their age, it’s clear that dog pampering, in general, has become more popular over the years. Back in 1996, Americans spent approximately $21 billion on their furry friends. Two decades later, that number is raised to nearly $73 billion.

The pet industry is constantly making new products to pamper our dogs, so it makes sense that the money spent would increase so much. After all, we are constantly discovering new food and new products to keep our dogs happier and healthier. People who don’t have dogs might judge dog parents for pampering, but our dogs deserve all the love in the world. So, there’s no shame in spoiling your dog now and then.