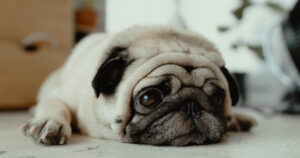 Being in the hospital during the COVID-19 pandemic is more difficult than ever. Many people are unable to see their human family members, and for others, it’s even harder to be away from their dogs.

When a terminally ill man was brought to the Norton Audubon Hospital in Kentucky, all he could think about was his Pug named Duke. Poor Duke had been left alone for two whole days. The man didn’t have any family or friends to care for Duke, so he began to panic. Then, he reached out to his nurse, Penny Manning, for help.

It’s common to hear about nurses going above and beyond for their patients, especially during these difficult times. However, Manning was shocked at first when she heard the patient’s request. She had simply asked him if there was anything she could do to help, and he asked her to care for Duke.

Duke is deaf and almost blind. He’s 12 years old now, so he also has stiff arthritis. If he was left alone any longer, his dad feared that the little Pug wouldn’t make it. Manning didn’t know if she could care for the dog herself, so she asked around. The hospital staff began searching everywhere, trying to find arrangements for Duke.

No one seemed to be willing to take in a special needs Pug right now. Plus, the patient wanted to guarantee that his furry friend was in good hands. So, Manning knew she was Duke’s only hope. With the patient’s permission and a key to his apartment, Manning’s boyfriend was able to retrieve Duke right away. The little dog was a bit skinnier and smellier than usual, but he was still alive.

Little did the patient know, Manning already had a strong passion for rescuing dogs. Not long ago, Manning had to take a break from nursing due to a complicated back surgery. During that time, she continued to help others by adopting and fostering dogs.

Now, the patient feels much better knowing that Duke is in good hands. Manning said that the Pug has already adjusted well to his new surroundings. He has been getting along great with all of Manning’s dogs and cats.

Every day, Duke comes out of his shell even more. He’s a very loving dog who always gets excited to greet Manning when she comes home from work. He always wants to be right by his rescuer’s side no matter what.

Manning sends photo and video updates to Duke’s dad often. She hopes that she can help them be reunited soon. Once visitors are allowed at the hospital, she promises to bring Duke in for a visit. Even if Duke’s dad doesn’t get better, Manning said she will continue to care for Duke no matter what.

Manning’s colleagues were in awe of her kindness toward her patient. Not just anyone would be willing to take in a dog with such short notice. So, they awarded her with the “Good Henry Award”, an honor named after the hospital’s full-time facility dog. Manning said that she doesn’t deserve the medal because she was just doing the right thing, but her actions saved Duke’s life.