UPDATE: Raina, Canine Companion Of Ruuxa The Cheetah, Passes Away 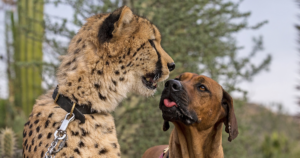 Zoos and animal sanctuaries often pair cheetahs and dogs together. These two animals might seem like unusual friends, but many animal caretakers found that they can actually form very beneficial relationships. When a cheetah cub is rescued, dogs can be a great friend as they grow up. Dogs can help rescued cheetahs thrive and teach them to be calm and happy. While not all dog and cheetah friends are together for life, Raina and Ruuxa were. This famous dog and cheetah friendship inspired animal lovers all over the world, but sadly, it has come to a heartbreaking end after Raina’s passing.

Raina and Ruuxa have been best friends since 2014. They were introduced to each other when they were both only a few months old. The staff at the San Diego Zoo Safari Park hoped that introducing them at an early age would help them find comfort in each other.

Ruuxa arrived at the zoo because he had a genetic condition that affected the growth of his front legs. Because of this, he couldn’t run or even walk like a normal cheetah. He needed to go through a serious surgery and medical procedures to get it corrected.

Surgeries are scary for anyone, but they’re always much better with a loved one by your side. So, as Ruuxa bonded with Raina, the Rhodesian Ridgeback, the two of them felt more comfortable together. Raina was right there by Ruuxa’s side through every hospital visit and every recovery. The two didn’t like to be apart at all, not even for 15 minutes.

Thanks to Raina’s support, Ruuxa recovered and learned to run again. But even as adults, the two of them remained friends. As Raina aged, she fought an aggressive tumor for a long time. As if to return the favor for Raina’s care, Ruuxa was there to support her friend too. In fact, they were so inspirational that they even had a children’s book written about them.

Many cheetah-and-dog friendships don’t last their whole lives, but this friendship was truly special. So, when Raina passed away, Ruuxa and all the zoo staff members were devastated.

Unfortunately, Raina had struggled with the tumor and other medical conditions for a while. The staff hoped she would get better, but her conditions only seemed to worsen. As her health declined more recently, the zoo knew that it was time to say goodbye to her. Everyone at the zoo, especially Ruuxa, will miss her greatly.

“Please join us in expressing condolences to the many San Diego Zoo Global staff members, volunteers, and guests who will be feeling this loss,” the zoo posted on Facebook. “Please also join us in thanking the Veterinary Specialty Hospital for their support and treatment of Raina over the years.”

Along with the emotional post, they also shared some adorable pictures of Raina too. They know that this time will be very difficult for Ruuxa, but luckily, there is another canine companion that will step up to help look after the loving cheetah. Rae is a younger Rhodesian Ridgeback and a second dog friend to Ruuxa. This sweet pup will never be able to replace Raina, but he will do his best to support Ruuxa during this tough time.

Rest in peace, Raina. You will be missed greatly.

The post UPDATE: Raina, Canine Companion Of Ruuxa The Cheetah, Passes Away appeared first on iHeartDogs.com.