With NYC Mostly Closed, Dog Has Tourist Spots To Himself 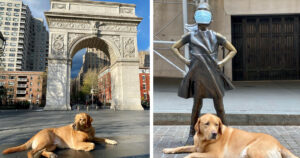 Since the coronavirus outbreak required most places to close, formerly packed areas are now empty. You’ve probably seen some of those slideshows featuring haunting images of people-less places during the outbreak. It’s pretty strange looking at a place like Times Square in New York City without its usual throng of people snapping photos or commuting to work.

Farley, a Labrador named after actor Farley Granger, and his human agree. Since shelter-in-place began, the 6-year-old dog accompanies his dad Craig Karpel on walks around Manhattan to keep healthy (and sane.) Strolling through their city without its usual vibe feels strange and surreal, Karpel told Frommer’s.

“I couldn’t believe how quiet and empty it was outside, and when I saw some of these huge sites, usually mobbed with people, entirely deserted, I started taking pics of him in front of them. It was so jarring seeing people-loving Farley in these vast empty spaces. It seemed very melancholy but also a reminder of how vibrant the city is at its best and how that vibrancy was missing.”

How bittersweet: Farley gets his gorgeous photos, but he misses sharing the locations with people.

The frustration of trying to capture a good photo of your family in New York without too many background bodies has totally been eliminated for Farley’s dad. He gets these iconic New York City locations all to himself. They collectively make for a pretty impressive gallery of city tourism. They also create a tapestry of important memories for the local duo.

Regal-looking Farley has posed in front of Washington Square Park, Broadway theaters, Katz’ Deli, and The Rockefeller Center. Initially back in April, Karpel took these photos of Farley just for them. Later, he started sending them to friends.

“I was texting the photos to friends who really responded well to them and it encouraged me to keep doing it. As time went on, I started making our walks purposeful and going farther afield to specific places that are meaningful to me—restaurants, theaters, Times Square, Central Park, Soho.”

Of course who wouldn’t love seeing one of the world’s largest cities through the eyes of a good boy?

Many still at home are somewhat living vicariously through Farley, Karpel told Broadway.com.

“Friends of mine who live in NYC were barely venturing off their blocks, or at least no farther than the grocery store, and were amazed to see what the city was looking and feeling like. Friends from far away, who love New York, had bittersweet reactions and connected so strongly to the images.”

Follow @farley_nyc on Instagram to see where else this cutie visits during coronavirus. Hopefully he’ll be visiting these places with more people soon. He really loves people!

Personally, I hope he gets to actually meet the cast of Hamilton some day.

Until then, there’s no crowd waiting outside the stage door.

The post With NYC Mostly Closed, Dog Has Tourist Spots To Himself appeared first on iHeartDogs.com.