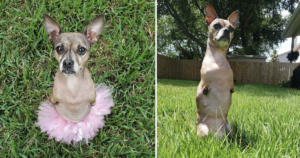 Nessie McNubbins is a Chihuahua mix that was born without front legs. It’s suspected that neglectful breeding was the cause of her appearance. However, Nessie hasn’t let any of that hold her back.

Nessie waited at a shelter for the first 8 years of her life. She was adopted and returned three different times, and she didn’t understand why no one wanted to keep her. Luckily, her forever family finally came along and gave Nessie a loving home with two other special needs dogs.

Looking for a Home

Nessie’s time at the shelter was long, but she never gave up hope. Even though she was missing two legs, she quickly learned how to move around on her own. She put on a brave face, and she was always loving toward everyone she met. Many people stopped by to see her, but no one was willing to adopt her.

Three different families adopted Nessie during her stay. But every time, they returned her only a few days later. None of them were ready to take on the responsibility of caring for a special needs dog. So, when Nessie’s forever family expressed interest in her, the shelter feared that the same result would happen.

Theresa Loyacano spotted Nessie’s photo on social media. She said it was like fate because she knew she had to adopt the sweet pup almost instantly. When she contacted the shelter, they tried not to get their hopes up too much considering what happened with other families. Luckily, they were pleasantly surprised when Loyacano turned out to be the perfect mom for Nessie.

In fact, Loyacano was so in love with Nessie that she wanted the world to see her beautiful dog. So, she created social media pages for Nessie, where she shares lots of adorable photos and videos of the dog’s adventures. Nessie now has wheels to help her get around, but she actually prefers hopping by herself.

Since Nessie’s adoption, Loyacano realized how much she loves helping dogs in need. Just over a year later, she adopted a second dog named Frankie Lou. Frankie Lou is a larger dog who was born with the same condition as Nessie. Loyacano adopted Frankie Lou when she was still a puppy, so the family got to watch her grow and learn how to walk around with only two legs.

Nessie and Frankie Lou formed a special bond right away. As Frankie Lou grew up, Nessie showed her how to walk and play. Loyacano said that Nessie never played much when she was the only dog, but as soon as she met Frankie Lou, her playful side appeared. She finally found someone else who understood her.

“Caring for special needs dogs was never part of our plan, but when we saw Nessie’s face and considered how frightened she must have been in the shelter and being abandoned all those times, we knew we could help,” said Loyacano.

Less than a year after adopting Frankie Lou, Loyacano adopted another two-legged dog named Ali. Ali is a tiny Chihuahua that Loyacano was temporarily looking after for a while, but then she fell in love. She couldn’t say no to the adorable little pup, so she made Ali a permanent member of the family. Now, all three dogs have each other. Without Loyacano’s kind heart, they might’ve never found their forever homes. But now, they’re living the dream!

The post 2-Legged Chihuahua Who Spent 8 Years At Shelter Is Now A Star appeared first on iHeartDogs.com.