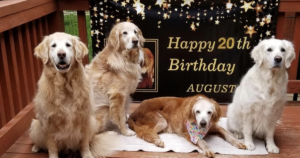 August, also nicknamed “Augie”, the Golden Retriever recently celebrated an exciting milestone. She turned 20 years old on April 24th, 2020. Every birthday calls for a celebration, but this one was extra special. That’s because GoldHeart Golden Retrievers Rescue announced that this 20th birthday made Augie the oldest known Golden Retriever in history!

Augie lived with a few different families throughout her life. While she was at GoldHeart Golden Retrievers Rescue, she was adopted and returned twice. She was a great dog, but the reasons for being returned were out of her control. Luckily, Jennifer and Steve Hetterscheidt from Oakland, Tennessee adopted Augie again at 14 years old. They became her true forever family.

14 years old is already old for a Golden Retriever, but Jennifer and Steve said that Augie was fairly healthy when they adopted her. She was diagnosed with kidney issues not long after her adoption, but she has been doing better since then. She takes special supplements to help with her kidneys and joints.

Throughout Augie’s 6 years with Jennifer and Steve, she has been just as healthy as any younger dog. She loves to go on RV trips and play fetch outside. Sometimes, it takes her a bit longer to get up in the morning, but she still walks well.

Even at 20, Augie is just as happy and full of life. Her family never expected that they would have her with them for so long, but they’re extremely grateful. They love caring for senior Golden Retrievers. In fact, Augie has three Golden Retriever siblings: Sherman, Belle, and Bruce.

To celebrate this exciting event, Jennifer and Steve threw a birthday party for her. They set up some adorable birthday decorations and they even gave her a dog-friendly carrot cake. She also got to spend some quality time with her dog siblings. It was the perfect day for any pup. The Guinness World Records doesn’t usually give out awards for the oldest dog of a certain breed, but Augie’s family knows she has set a record, and that’s enough.

Jennifer says the key to keeping their Golden Retrievers healthy is taking them to the vet often. She has a very good relationship with Augie’s vet, so they’re able to tackle any potential health concerns right away. After all, she wants to make sure all her furry friends live a long, healthy life.

“We care for them as long as we have them, and love them forever,” said Jennifer.

20 years old is nearly twice Augie’s expected lifespan, and she’s still going strong. She’s lucky to have finally found a family that cares about her so much. We don’t always get a lot of time with our loving dogs, so we need to make the most of it and ensure that they stay as healthy as possible.