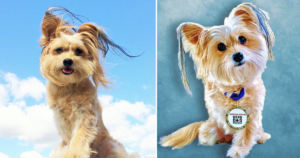 Jeanie the three-legged dog is living the dream. She has a loving family and a sister who also has only three legs. Plus, everyone adores her! However, her life wasn’t always so perfect.

When Jeanie was only 5 months old, she was found as a stray with a crippled front leg. She had a difficult time walking, but luckily, she was found and brought to a local vet, where her leg had to be amputated. Not long after, Lydia Crochet adopted Jeanie. She could tell that the pup was special, so she started training her as a therapy dog.

From Stray to Star

Right away, Crochet discovered that Jeanie had the perfect temperament for a therapy dog. The little pup is always interested in comforting others and making them feel better. So, she became a certified therapy dog in no time.

As a therapy dog, Jeanie visits a lot of people in need. She goes to nursing homes and schools just like most therapy dogs do, but she also goes above and beyond by visiting as many locations as possible. She attends counseling sessions with amputees, she visits grief groups for children, and she comforts kids who have witnessed trauma. One of her favorite places to visit is the Children’s Advocacy Center, where she comforts the children who are being questioned by detectives regarding abuse cases and violent crimes.

“Jeanie can do anything a four-legged dog can do. There’s nothing really that makes her different, that she’s missing a leg. It doesn’t slow her down a bit and I think kids realize that it doesn’t really matter that you’re a little different or look a little different,” said Crochet.

Many children and adults are inspired by Jeanie’s story. In fact, the pup now has a busy schedule since so many people want to meet her. She quickly became a celebrity thanks to all the incredible work she has done.

In 2019, Jeanie won the Therapy Hero Dog Award at the American Humane Hero Dog Awards. She had placed in the top three the year prior, but when she entered again the next year, she was determined to win. Now, she’s recognized for her fame and hard work. Her social media accounts have quickly increased in popularity since then.

Jeanie even has her own products. She has her own book called Jeanie the Three-Legged Dog: I Don’t Need Four Feet. It’s a beautiful book about how she went from a stray to a well-loved service dog. The story is meant to show the world that anything is possible if you set your mind to it. Jeanie also has her own stuffed animals for sale too.

“It’s not stopping her from doing anything. She’s still special. And she’s just nice. She’s different and she helps people,” said Josh Brennan, a child who played with Jeanie at the library.

Crochet hadn’t planned on adopting another three-legged dog, but then she met Pippa. Pippa was hit by a car, but her former family quickly ran out of funds to pay for her surgery. So, they surrendered her. The vets had to remove her back leg and tail. When one of Jeanie’s fans shared Pippa’s information with Crochet, she knew she had to adopt her.

Now, Jeanie and Pippa live together with their loving family. Jeanie greatly helped Pippa adjust to her missing leg, and now, the two of them are best friends. Jeanie continues to help people as much as she can, and when she does, she helps make the world a better place.