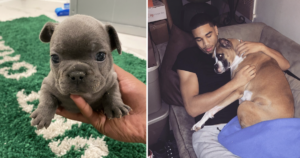 Many celebrities have been finding ways to tribute Kobe Bryant after his tragic death in a helicopter crash. Some players wore Brant’s jersey to honor him while the NBA even renamed the All-Star Game MVP trophy after him. However, basketball player Jayson Tatum found an even better, and cuter, way to honor his late friend.

Tatum is about to welcome a new member into his family: a French Bulldog puppy. When it came to naming the pup, he didn’t have to think twice. He thought of a name that would honor Bryant for years to come.

Bryant was the star of the Los Angeles Lakers. However, Tatum plays for the Boston Celtics, the Lakers greatest rival team. In fact, the two of them never actually crossed paths in the league. Bryant retired in 2016 while Tatum started playing in 2017.

Even so, they formed a close bond away from the court. The two of them worked out together during offseasons. Therefore, Tatum missed Bryant just as much as he would’ve missed any of his teammates.

“Heartbroken. My hero. My idol,” Tatum wrote on Instagram after Bryant’s death. “The reason I started playing this game, the reason I fell in love with this game. Growing up wanting to be just like you, to you becoming a mentor, beyond thankful for everything you’ve done for me.”

Now, Tatum announced that he will be bringing home a puppy in Bryant’s honor. The pup will be named Bean, which was Bryant’s middle name.

Tatum even found Bean in Philadelphia, which is where Bryant attended high school before he was drafted in 1996.

Nicole Yang, a journalist for the Boston Globe, was the first to share adorable photos of Bean on Twitter. As expected, fans are already in love with the little pup. She also joked that Bean should set up a playdate with Weezy, the Boston Celtic’s manager’s French Bulldog. After all, it would be heartwarming to see!

Tatum already has two other dogs named Creek and Deuce, who are both Boxers. Boxers are his favorite breed, but he’s also excited to welcome a smaller dog into the family for a change.