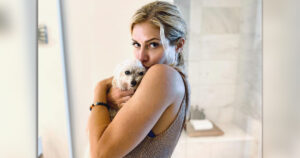 Longtime WWE fans probably already know all about Torrie Wilson’s relationship with her little white dog Chloe. The Hall Of Fame former wrestler and fitness model more than fawned over that pup. In essence, they were co-stars.

Chloe has been a major part of every aspect of Wilson’s life for the past 17 years. The dog appeared in the ring with her frequently, and could often be found tucked under her arm (usually in costume.) Since then, we’ve seen her pop up online from time to time.

Sadly, this month Wilson shared some devastating news with her fans about her best friend. In an Instagram post, she informed everyone that sweet Chloe had passed away. Wilson wrote:

“Today I said goodbye to my angel Chloe & words can never describe how much my heart hurts. 17 YEARS she was my ride or die.”

The “Queen Of The House”

Chloe came into Wilson’s life as a Christmas present. A tiny white Christmas miracle back in 2004. She fell in love at first sight, and everyone in Wilson’s life loved the pup too.

“She seriously pulled me thru some of my darkest days & rode with me thru alllll the fun. She even made it very clear my husband was the Daddy she wanted when she clung to him more than anyone I’ve ever met.”

Previously Wilson referred to Chloe as “the queen of the house” in a WWE extra about her pup. Chloe was living her best life in retirement, sunbathing and enjoying treats and cuddles.

Pepper the Chihuahua, Wilson’s other dog, will miss his sibling too. But they enjoyed each other’s company so much while they could. Wilson shared many photos of the two pups snuggling, with and without her.

A WWE Star In Her Own Right

In 2005, the WWE world met Chloe. She was so prominent during Wilson’s career that the dog even made it into Wilson’s action figure!

As Wilson described it, Chloe was just “such a natural” in the ring. She became a staple, and eventually she even got her own WWE Superstar page, which is a pretty big deal. Wilson would travel a lot for work, and Chloe joined her for those days on the road.

“I swear at times I thought she was human with the disapproving looks she gave me when I wasn’t doing the right thing…but she was a rare constant that made everywhere I went feel like home.”

Wilson liked to joke that with all of Chloe’s aged wisdom, she could write one heck of a book.

“[S]he has no doubt seen in ALL. (If she writes a book in heaven lookout.)”

Wilson ended her Instagram post with some advice: to hold your loved ones close, because we’re all “on borrowed time.” In the meantime, Chloe must be strutting around heaven like the Queen she is.

“Rest assured, I know she’s running like a puppy & showing everybody who the true Queen Diva is in heaven.”

I don’t doubt that she is.