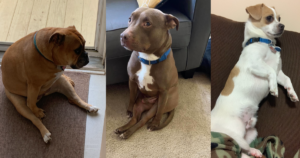 Fine, we have to concede that in the most technical sense, dogs are not human. But in many ways… aren’t they kind of people? They understand parts of our language, they imitate our actions, and they always want whatever people are eating. Some dogs, despite having four legs, even sit like human beings.

That last concept became the center of a Twitter thread recently. Why is it that when a dog sits with their back legs in front or with their backs straight up they look like they’re trying to be people? At the very least, they don’t look natural. Though they do look extremely cute!

Twitter user @ohmyitsbrittt got the conversation started with some photos of her dog Mr. Sparks. He likes to sit in a particular un-doglike way.

The tweet surged to over 1.2 million likes, and many others chimed in to provide their own captions for the hilarious photos.

“When you’re at your best [friend’s] house and her mom starts going off on her in the other room, then comes into the room you’re in and says ‘ you’re good, make yourself at home.'” – @lexxiphoo via Twitter

“This doggo is clearly training for the parallel bars for the next Olympics.” – @magzdilla2early via Twitter

Apparently, as a result of these viral pics the sitting “weirdo” Mr. Sparks will be featured in a PetSmart commercial. Mr. Sparks is now on Instagram too, so give him a follow!

Though Mr. Sparks’ person posted the photos proclaiming him “a weirdo,” this appears to be a common doggie sitting position. Many replied to the post with photos of their own “weirdo” pups trying to sit like people.

“My dog does this all the time. I thought she was the only one!” – @_Tibbyy via Twitter

It turns out a lot of dog parents have observed this bizarre phenomenon in their pups in silence. Now everyone’s starting to realize their “weirdo” dog sits like plenty of others do.

Maybe it’s because dogs are somewhat biologically programmed to imitate human behavior. Maybe that really is more comfortable for them! But whatever the reason, dogs look so silly in this sitting position.

If your dog sits in this human-esque way, at least you know they’re in good company! Who says there’s gotta be one way for a dog to sit anyway?