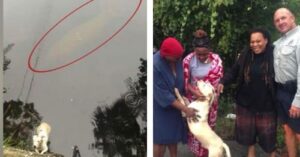 A Pitbull pup found himself in a desperate situation when his escape from his yard led to a tumble into the local river. Though a local police officer raced to the scene to help, this dog’s survival may be due to a helpful sea creature that swam by his side the whole time.

A Tampa resident woke one morning to the sound of a struggle coming from the river behind her house. After investigating the area and finding a distressed pup clinging onto the edge of the sea wall, the resident made a desperate plea to the local police to come and save this canines life.

When Officer Lopez of the Tampa Police arrived on the scene, he expected to walk up to a standard water rescue. He never could have imagined what he would see next!

Officer Lopez describes being absolutely shocked when he looked down into the water at the terrified pup. Not only did he see a dog fighting to stay afloat, but he also saw an unexpected creature just below the surface of the water. Below the dog was a large manatee floating just beneath the terrified pup, likely offering the love and encouragement that this pup needed to keep hanging on.

“They’re curious by nature so I’m sure the sound of the dog splashing in the water trying to get up the sea wall got his attention and he came over to investigate, maybe calm the dog and tell him it was going to be alright.” – Officer Lopez

Officer Lopez then borrowed a nearby extension ladder and shimmied down into the water where the exhausted Pitbull pup waited. With a calming voice and some Milkbone treats in hand, he was able to scoop the furry friend up into his arms and bring him to safety.

Once the dog was pulled from the water and began to dry off, a concerned pet parent ran around the corner to the sound of the commotion. It turns out that this furry friend broke free from the fence that contained him the night prior to his rescue, and his owner had been frantically looking for him ever since!

While we can’t know for sure, it appears that this lucky pup had a helpful guardian at his side to ensure that he walked away from this situation safely. The concerned manatee slowly swam away once the officer rescued the runaway pup from the river, possibly realizing that her work here was done!

“Once I got in the water I could see it kind of turned away and gave one good little flutter with its tail and was on its way.” – Officer Lopez

This incredible moment of kindness between a sea creature and a furry friend warmed our hearts, and we have no doubt that this helpful manatee will go on to offer a helping fin to other animals in need!

The post Dog Falls Into River & Is Kept Safe By A Helpful Sea Creature appeared first on iHeartDogs.com.