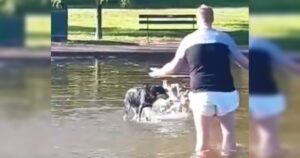 Even when our dogs misbehave, we just can’t stay mad at them. My dog once made direct eye contact with me while he urinated on my bed, and an hour later I was calling him a “perfect baby angel” again. Since our dogs bring so much joy to our lives most of the time, sometimes you just gotta sigh and shake your head as you dump your dog pee-soaked sheets in the wash.

If anything embodies this “well, what can you do” moment all pet parents experience, it’s a recent viral video featuring a man and a public fountain. At first, the video appears to show a man in shorts climb right into the park water fountain for no reason. He begins slowly walking towards the center of it as people all around watch this seemingly bizarre choice.

Then comes the glorious cinematic reveal, the reason for the plunge. An excited Lab pup is playing in the bubbling water, having the absolute time of his life. He leaps in and out of the cascading liquid, biting at it and refusing to be wrangled.

The poor man must have been calling his pup to come out of the fountain for a while before he deemed it necessary to enter the water himself. But the best part of the whole video is his reaction. He just holds his arms out in a half shrug as if to say “Come on, man” to his dog.

Unfortunately for him, the pup interprets his person’s approach as an invitation to play in the water more. After a bit of bobbing and weaving, the man eventually gets ahold of his pup. Looks like public bath time is over buddy! Sorry.

Watch the whole video for yourself below, it’s hilarious:

Man reluctantly gets into pond. pic.twitter.com/1YVaWitfMz

We’ve All Been There

Of the literal millions of viewers this video has across several social media platforms, a large amount related to every moment of the person/pup interaction. After the great reveal, everyone understands what would make someone wade into a public fountain barefoot. Dog retrieval, of course! Most notably, we all recognize that shrug.

“I feel for him. I have been the ‘What are you doing bro’ in this scenario.” – @Jujumanjis via Reddit

“I’ve made that same gesture so many times at my dog.” – @Magna_Cum_Nada via Reddit

Some even relate to the slow, shameful yet amused walk.

“The way that man walks tells you he’s had to do this before.” – @jengoddard2 via Twitter

“I should have recognized the defeated shuffle of a pet owner having to go get a animal that won’t come.” – @CalluColorGod via Imgur

“I had to wade into a stream to retrieve my Border Collie who had been biting at a tiny waterfall thing for 90 mins. I feel this guy’s pain.” – @BlueMerleBill via Twitter

So if your dog is the fountain-loving type, you might consider a more secure leash at the public park. Otherwise you could end up thigh-deep in fountain water yourself.