Fans Surprised When Bachelorette Star Introduces His New “Significant Other” 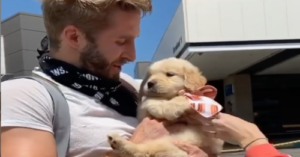 Shawn Booth was the winning suitor in the season of The Bachelorette that starred Kaitlyn. The couple dated for three years, eventually parting ways. Booth recently took to Instagram to tease fans about a new love coming into his life. Many were surprised to see that the new love was an adorable Golden Retriever puppy named Walter.

Fans Were Excited to Meet the New Love Interest

Booth told his Instagram followers that he was getting ready to introduce them to a new love interest in his life. He said, “I feel like tonight is as good of a night as ever to let you guys know that there is somebody new in my life and I’ve been keeping it under wraps for a little.” Fans assumed that the personal trainer was talking about a new lady in his life. Not so!

Booth documented his flight from his hometown of Nashville to Salt Lake City. He dropped hints throughout the video spurring excitement to meet this new lucky love. He said, “I’m excited to share with you guys. Hopefully, you approve but if you don’t, I don’t really care because I’m happy to have this significant other in my life.”

He relayed that he wouldn’t normally travel during this time but that he felt it was important. He said on Instagram, “I haven’t traveled in months, this is the only reason why I would hop on a plane right now.” He added after he landed, “It’s about to go down. I’m definitely a little nervous and a little anxious. Feeling a little guilty but most importantly, I’m excited.”

The New Love Was a Puppy Named Walter

Before long, Booth shared some photos of the new love in his life—an 8-week-old Golden Retriever puppy named Walter. Some fans expressed discontent over Booth’s reveal. They were expecting a woman and got a puppy instead. You won’t hear any complaints here! Seeing a personal trainer and reality star snuggled up to his new puppy is a-okay with us! Golden Retrievers are revered dogs and we just can’t get enough of them!

With the heaviest heart I’ve ever had, I wanted to let you guys know that I lost my best friend today. Tucker passed peacefully in my arms and in the comfort of our backyard. I poured every ounce of my heart into him and he gave me his entire heart right back. I’ve never loved anything more and he was the best boy I could ever ask for. I was the luckiest person in the world to have him by my side for 11+ years. I already miss him so much. . “If love could have saved you, you would have lived forever ..”

Walter is not Booth’s first dog. Just two months ago Booth shared the heartbreaking news that his longtime friend and companion, Tucker, also a Golden Retriever, had passed away. Walter will never replace Tucker’s place in Booth’s heart. In these situations, love is doubled, not halved.

Walter has his own Instagram page, which is quickly amassing a large following. He already has nearly 45,000 followers. Check it out to keep up with the cuteness and see the entire video montage below.

The post Fans Surprised When <i>Bachelorette</i> Star Introduces His New “Significant Other” appeared first on iHeartDogs.com.