Former Army Sergeant Fights Off Alligator To Save His Rescue Dog 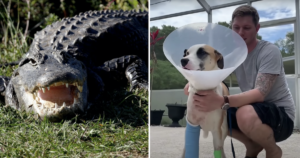 When a dog is in danger, we have to think fast. Most dog parents would do anything to save their best friend, even if it means putting themselves at risk. That’s exactly what Trent Tweddale did for his rescue dog, Loki.

Tweddale and Loki were just going for a regular walk in Wesley Chapel, Florida. But when Loki got too close to the water, he came face-to-face with a massive alligator. Tweddale didn’t have any time to process the situation. All he could do was protect his pup.

While they were walking, Loki stopped near the water. The rain had caused the river to rise higher than usual, so the dog put his two front paws in. Then, out of nowhere, a 13-foot gator jumped forward and grabbed the 6-year-old dog by the leg. Without hesitation, Tweddale, a former army staff sergeant, rushed to save his dog from the wild animal.

“I grabbed the dog’s collar to try to pull him back, and I ended up in a tug-of-war match with this gator, and the gator was not letting go,” said Tweddale. “So I let go of the collar, and I got about knee-deep into the water and started pounding on the gator’s head until he eventually let go.”

For most people, fighting a gator would be terrifying. But for Tweddale, he just did what he had to do. Luckily, Tweddale walked away with only a few small scratches, but poor Loki was in critical condition.

The front leg that the alligator grabbed onto was nearly severed. If the fight had gone on any longer, the dog likely would’ve lost his leg. Thankfully, Tweddale was able to rush Loki to the vet in time. He had to go into emergency surgery to save his leg.

Loki has a long road to recovery ahead of him, but he looks like he’ll be just fine. The vets had to put plates and screws into his leg to help reconstruct it. The goal is that after he completely recovers from surgery, he’ll be able to regain full use of his paws again.

Tweddale is right by Loki’s side for every step of his healing process. However, he also wants justice for his pup. Since the incident, he has returned to the scene to look for the alligator that attacked his dog. Florida Fish and Wildlife even agreed to set up a trap to catch the gator. Tweddale said he used a rooster as bait, but he hasn’t had any luck yet.

Loki is so lucky to have a brave dad to protect him. After all, dogs are such an important part of the family, so most dog parents would probably do the same to save their dog. Hopefully, Loki will make a quick recovery!

The post Former Army Sergeant Fights Off Alligator To Save His Rescue Dog appeared first on iHeartDogs.com.