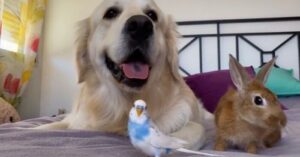 Those of us that love animals know that friendship doesn’t have to be limited by species. Dogs are known to form bonds with animals of all kind, and this lovable Golden Retriever named Bailey is no different!

Bailey has been his family’s pride and joy from the moment he entered their lives. His fur dad wanted to capture every precious moment of his life as he grew, leading him to create a YouTube channel that has since been jammed packed with adorable content.

Not only can you watch Bailey conquer all the puppy milestones on his channel, but you can also get a front-row seat to the compassion that he has for fluffy friends of all kinds. Bailey was first introduced to a baby bunny named Sam when he was about 1 year old. From the moment that Bailey met his first rabbit friend, it was clear that he would go on to be a dog dad for every animal that stepped into his home.

Bailey and Sam spent the next few months cuddling at every chance they had, sharing snacks on the couch, and even helping to groom each other when it was time to freshen up. With how wonderful of a friendship these two shared, Bailey’s fur parents knew it was time to introduce him to even more critters.

The next animal to enter the pack was a tiny bird named Sky. Though this feathered friend was quite different from his rabbit companion, Bailey was just as welcoming. He was so excited about the new addition to their family, he even offered Sky a bunch of slobbery kisses as an initiation.

If you weren’t already convinced that Bailey was the kindest pup around, he continued to prove his love for all animals when he was introduced to even more baby bunnies in need of a friend. At this point, Bailey was acting as a canine guardian for 2 adult rabbits, 5 baby bunnies, and 1 bird. Bailey couldn’t be happier with so many unique friends around him!

Bailey still spends his time hanging out with his favorite rabbits and his best bird friend. There are floods of videos showing him cuddling up with his furry friends, sharing snacks, and continuing to be the best Retriever dad out there!